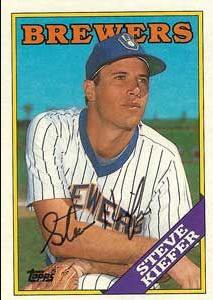 Steven is alive and kicking and is currently 62 years old.
Please ignore rumors and hoaxes.
If you have any unfortunate news that this page should be update with, please let us know using this .

Steven George Kiefer (born October 18, 1960) is a former Major League Baseball third baseman. He played in parts of six seasons in the major leagues from 1984 until 1989. Most of his career-best totals were set in 1987 while playing for the Milwaukee Brewers.