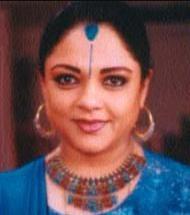 Tanvi is alive and kicking and is currently 61 years old.
Please ignore rumors and hoaxes.
If you have any unfortunate news that this page should be update with, please let us know using this .

Azmi met with success over her portrayal of a troubled doctor in the tele-series,Jeevanrekha (Lifeline). She has also acted in television. She is the daughter of famous Marathi-Hindi actress Usha Kiran and Dr. Manohar Kher. Tanvi has acted in number of Marathi and Hindi films and Marathi tele serials. She first appeared in a young widow in telefilm Rao Saheb (1986) directed by Vijaya Mehta.
In 2014, she signed on to participate in Sanjay Leela Bhansali's film Bajirao Mastani playing the role of Radhabai, mother of Bajirao I. She had to go bald for her role in the movie. She got the National Film Award for Best Supporting Actress for her outstanding performance in the film Bajirao Mastani.

Azmi is married to Baba Azmi, cinematographer and brother of Shabana Azmi, thus connected with the Akhtar-Azmi film family. Her niece, Saiyami Kher, made her Bollywood debut in the 2016 film Mirzya.