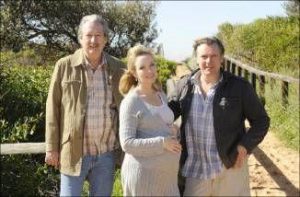 Ted is alive and kicking.
Please ignore rumors and hoaxes.
If you have any unfortunate news that this page should be update with, please let us know using this .

A quintessential Aussie bloke, with outspoken opinions on everything, Ted is a very well-preserved man in his mid-60s.Just over a year ago, he took early retirement from his job at a local building society to enjoy the fruits of years of hard work and the company of his beloved wife Louise. They bought and refurbished a clapped out old campervan, but tragically on the day of their grandson Nathan’s wedding and just a few short months into their long-planned odyssey around Australia, Louise suffered a massive and fatal coronary.Her death has left a gaping void at the centre of his life. Ted has soldered on, sublimating a lot of his pain, trimly keeping up appearances, but it’s clear to all around him, especially his daughter Julie, that the sun has gone out of his life.His grandkids have noticed it, too. The fun grandad, the one who was always up for a practical joke, or a game of backyard cricket, doesn’t make himself anywhere near as available as he used to.A clue to how deeply the loss of his wife has affected Ted comes when he starts – in a sense to be nearer to her – wearing his wife’s clothes.It’s all fine in the privacy of his own home, but mortifying when he suffers a minor heart attack and is hospitalised, in full view of the gawping residents of his retirement village, actually dressed in one of Louise’s dresses!At the hospital, he tells his daughter about how the aching loneliness found brief relief when one afternoon he came across Louise’s untouched clothes still hanging in their wardrobe, her perfume vividly transporting him to happier times.Too ashamed to go home, he’s invited by Julie to recuperate at her place. The shame and humiliation are enough to push Ted to consider giving up on life entirely.