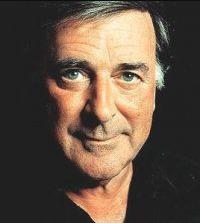 Sir Michael Terence "Terry" Wogan, KBE DL (born 3 August 1938) is an Irish radio and television broadcaster who has worked for the BBC in the United Kingdom for most of his career. Before he retired from his weekday breakfast programme Wake Up to Wogan on BBC Radio 2 in 2009, it had eight million regular listeners, making him the most listened-to radio broadcaster in Europe. Wogan began his career at Raidió Teilifís Éireann where he presented shows such as Jackpot in the 1960s.