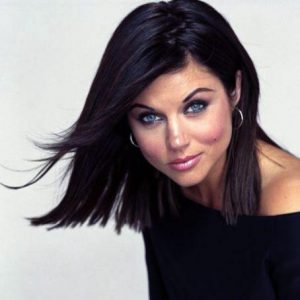 Tiffani-Amber is alive and kicking and is currently 48 years old.
Please ignore rumors and hoaxes.
If you have any unfortunate news that this page should be update with, please let us know using this .

Does Tiffani Thiessen Have the coronavirus?

Tiffani Amber Thiessen is an American actress. She is primarily known for starring as Kelly Kapowski on Saved by the Bell and as Valerie Malone on Beverly Hills, 90210 (1994-1998), two TV series that met great success. Thiessen has also starred in other TV series such as Fastlane (2002-2003) and White Collar (2009-2014), as well as in a number of TV movies, and she has also appeared in several films like Son in Law (1993), Shriek If You Know What I Did Last Friday the Thirteenth (2000), Hollywood Ending (2002) and Cyborg Soldier (2008).
Thiessen was born in Long Beach, California, the daughter of Robyn (née Ernest), a homemaker, and Frank Thiessen, a park designer and landscape architect. She has credited her brother, Todd, as one of her most important sources of inspiration, and her mother and grandmother as role models. Her mother has Greek, Turkish and Welsh heritage. She attended Cubberley Elementary and Marshall Junior High School in Long Beach. In 1992, Thiessen graduated as valedictorian at Valley Professional High School in Studio City, Los Angeles.

In early 1992, Thiessen started dating Brian Austin Green, introduced by mutual friend David Faustino; they moved in together in July 1994, but they broke up the next year. In 1999, she went through a difficult period in her personal life, when David Strickland, also an actor, whom she had begun dating, died by suicide. From 2001 to the spring of 2003, she was engaged to actor Richard Ruccolo, whom she had met during the Two Guys and a Girl run. She married actor Brady Smith on July 9, 2005, and they have two children: daughter Harper (born 2010) and son Holt (born 2015).