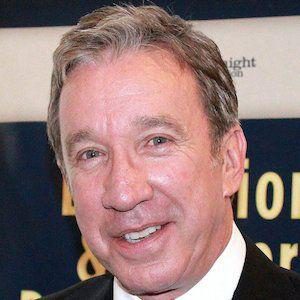 Tim is alive and kicking and is currently 68 years old.
Please ignore rumors and hoaxes.
If you have any unfortunate news that this page should be update with, please let us know using this .

Does Tim Allen Have the coronavirus?

Allen was raised as an Episcopalian. He was married to Laura Deibel from April 7, 1984, until they legally separated in 1999. Their divorce was finalized in 2003. They have one daughter. Allen married actress Jane Hajduk on October 7, 2006, in a small private ceremony in Grand Lake, Colorado. They had dated for five years. In March 2009, their daughter Elizabeth was born.
In September 2014, Allen, like his character Mike Baxter in Last Man Standing, became a licensed amateur radio operator under the callsign KK6OTD. Also like his character, Allen is a Republican. He has appeared on Sean Hannity's show and announced support for John Kasich, and later Donald Trump, in the 2016 presidential election.