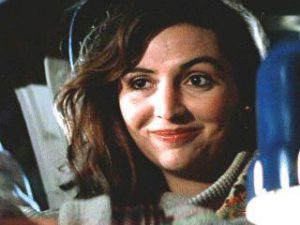 Tracy is alive and kicking and is currently 57 years old.
Please ignore rumors and hoaxes.
If you have any unfortunate news that this page should be update with, please let us know using this .

Does Tracy Reiner Have the coronavirus?

Tracy Reiner's mother, Penny Marshall, died on December 17, 2018 as she was 75 years old. Her cause of death was complications of diabetes.

Tracy Reiner is an American actress who is the daughter of filmmaker Penny Marshall. She was adopted by Marshall's second husband, filmmaker Rob Reiner, taking the Reiner family name. She is known for her roles in When Harry Met Sally..., Masque of the Red Death, A League of Their Own, and Apollo 13.
Reiner was born Tracy Henry in Albuquerque, New Mexico, the daughter of actress and director Penny Marshall and Michael Henry. She is filmmaker Garry Marshall's niece. Her mother was married for 10 years to Rob Reiner, who adopted her and raised her as his own. Her mother is of Italian, English and Scottish descent. Reiner's adoptive paternal grandparents are actor and comedian Carl Reiner and actress Estelle Reiner (1914-2008). Growing up, fifteen of Reiner's relatives were employed at labs run by the United States Atomic Energy Commission.