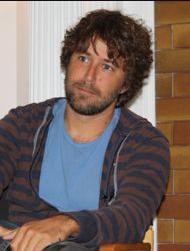 Travis is alive and kicking.
Please ignore rumors and hoaxes.
If you have any unfortunate news that this page should be update with, please let us know using this .

Travis Draft began his career at Chicago's The Second City in 1992 as an observer, working behind the scenes while attending film school at Columbia College. After working his way through the ranks at the famed theater, Travis directed and acted in a gonzo television pilot in 1994 that chronicled the exploits of three young comedians (Travis, Dave Sheridan and Frank Hudetz) traveling the country in a van shooting sketches using the unknowing public as supporting cast members. This was accomplished by the use of Glasses cam, eventually leading to the creation of the MTV cult-hit Buzzkill, the year was 1995.