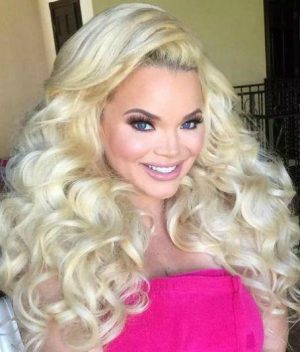 Trisha is alive and kicking and is currently 34 years old.
Please ignore rumors and hoaxes.
If you have any unfortunate news that this page should be update with, please let us know using this .

Does Trisha Paytas Have the coronavirus?

Trisha Kay Paytas is an American actress, entertainer, model, author and YouTube personality. Paytas was born and raised in Winnebago, Illinois, and moved out to California at the age of 18 in hopes of pursuing a film career in 2006. In 2006, Paytas had also began her YouTube channel "blndsundoll4mj". She had made her debut television appearance as a correspondent in Greg Behrendt's talk show The Greg Behrendt Show. She had appeared on the show until it was cancelled in 2007.
Paytas had began having trouble finding acting roles around this time so she had begun doing stripping and extra work to support herself. Paytas had been appearing as an extra, modeling and appearing in foreign commercials during her early years living in Los Angeles but had stopped once her YouTube channel had began receiving more attention and subscribers. She currently uploads videos every day to her YouTube channel, along with hosting a podcast called DishWithTrish, and releases music. She released the EPs Fat Chicks, Superficial b*tch, and Under The Covers in 2015.

Paytas was born in Riverside, California, to Frank and Lenna (née Kant). She is of Hungarian descent. Her parents divorced when she was three years old, after which she relocated with her mother to Illinois. Paytas was raised outside Rockford, Illinois in the city of Freeport. At fifteen, Paytas relocated to California to live with her father and brother, and enrolled in a Catholic online school program. She returned to Illinois to live with her mother at age sixteen, attending high school in Pecatonica.