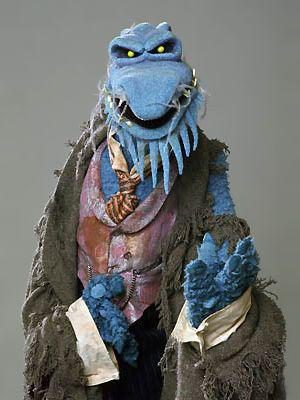 Uncle is alive and kicking and is currently 46 years old.
Please ignore rumors and hoaxes.
If you have any unfortunate news that this page should be update with, please let us know using this .

Does Uncle Deadly Have the coronavirus?

Uncle Deadly is a blue, reptilian-looking creature, also known as "the Phantom of the Muppet Show". Deadly made occasional appearances on The Muppet Show, and faded from prominence when the show ended. In 2011, Deadly returned in a pivotal role in The Muppets, as Tex Richman's henchman. Although he made his first appearance alongside Vincent Price on episode 119 of The Muppet Show, Uncle Deadly did not receive his proper introduction until episode 121. One by one, the Muppets tell Kermit that they have seen a phantom, but Kermit refuses to believe them until he sees Uncle Deadly with his own eyes. Once revealed, Uncle Deadly explains that he used to perform at the Muppet Theater, where he once played his most difficult role, Othello. On opening night he was killed... by the critics. Uncle Deadly sang a handful of songs on the show, including "Sheik of Araby" and a bar of "You're Just in Love" with Ethel Merman. He was featured in the Muppet Melodrama sketches with Miss Piggy and Wayne in the third season, of which only two were made. Although he didn't have a major role in most of the Muppet movies, Uncle Deadly did appear in the final group scenes at the end of The Muppet Movie and The Muppets Take Manhattan. He also appeared on The Tonight Show in 1979 when Kermit the Frog hosted. In the December 2000 issue of the Writers' Guild magazine Written By, which featured interviews with Muppet writers Jim Lewis, Kirk Thatcher and John Derevlany, it was mentioned that one of the projects Thatcher had in development was a silly Goosebumps-type TV show called "Uncle Deadly's House of Badness." The project never got off the ground, and it's unknown if a pilot was filmed or if a script was even completed. According to Jerry Nelson, Uncle Deadly was his tribute to actor John Carradine, whose sometimes hammy performances were a staple of horror films. After over twenty years of absence, Uncle Deadly returned in The Muppets, as the "sinister second-in-command" to Tex Richman. In an interview, Uncle Deadly explained that in his spare time, he had been haunting Stage 28, switching every other day with The Phantom of the Opera. They both took the weekends off; "even a phantom must rest."