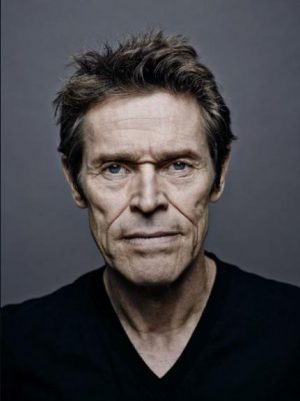 William is alive and kicking and is currently 66 years old.
Please ignore rumors and hoaxes.
If you have any unfortunate news that this page should be update with, please let us know using this .

Does Willem Dafoe Have the coronavirus?

William J. "Willem" Dafoe is an American actor. A member of the experimental theatre company the Wooster Group, he was nominated for the Academy Award for Best Supporting Actor for his roles as Elias in Oliver Stone's Platoon and Max Schreck in the comedy-horror film Shadow of the Vampire (2000). His other film appearances include The Last Temptation of Christ (1988), The English Patient (1996), American Psycho (2000) and the Spider-Man trilogy (2002-07). He has also had voice roles in Finding Nemo and its sequel (2003-16), Fantastic Mr. Fox (2009) and the forthcoming adaptation of Death Note (2017).
Dafoe is a founding member of experimental theater company The Wooster Group, where he acted in several productions. Dafoe made his film debut in Heaven's Gate in 1980, but was fired during production. Dafoe had his first leading role in the outlaw biker film The Loveless (1982) and then played the main antagonist in Streets of Fire (1984) and To Live and Die in L.A. (1985).

Dafoe received his first Academy Award for Best Supporting Actor nomination for his role as Sergeant Elias in Oliver Stone's war film Platoon (1986). In 1988, Dafoe played Jesus in Martin Scorsese's The Last Temptation of Christ and starred with Gene Hackman in Mississippi Burning, both of which were controversial. Following small roles in Born on the Fourth of July (1989) and Wild at Heart (1990), Dafoe began a six-film collaboration with director Paul Schrader with the drama Light Sleeper (1992). Dafoe starred with Madonna in the critically reviled erotic thriller Body of Evidence in 1993 and then co-starred in Clear and Present Danger (1994), The English Patient (1996), Speed 2: Cruise Control (1997), and The Boondock Saints (1999).
Dafoe met director Elizabeth LeCompte at The Performance Group, and the two began a professional and personal relationship there and at its successor company, The Wooster Group. Their son, Jack, was born in 1982.
Dafoe married Italian actress, director and screenwriter Giada Colagrande on March 25, 2005, a year after the two had met in Rome at the premiere of one of her films. Dafoe said in 2010, "We were having lunch and I said: 'Do you want to get married tomorrow?'" They did so the following afternoon at a small ceremony with two friends as witnesses. The couple worked together on her films Before It Had a Name and A Woman. They divide their time among Rome, New York City, and Los Angeles. He now holds both Italian and American citizenship.