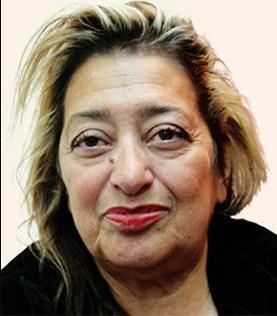 Dame Zaha Mohammad Hadid, DBE (Arabic: زها حديد‎ Zahā Ḥadīd; born 31 October 1950) is an Iraqi-British architect. In 2004 she became the first woman recipient of the Pritzker Architecture Prize. She received the Stirling Prize in 2010 and 2011. In 2012 she was made a dame. In 2014 the Heydar Aliyev Cultural Centre, designed by her, won the Design Museum Design of the Year Award, making her the first woman to win the top prize in that competition. In 2015 she became the first woman to be awarded the RIBA Gold Medal in her own right.
Zaha Hadid was born on 31 October 1950 in Baghdad, Iraq, to an upper class Iraqi family. Her father, Muhammad al-Hajj Husayn Hadid, was a wealthy industrialist from Mosul. He co-founded the left-liberal al-Ahali group in 1932. The group was a significant political organisation in the 1930s and 1940s. He was the co-founder of the National Democratic Party in Iraq and served as minister of finance after the overthrow of the monarch after the 1958 Iraqi coup d'état for the government of General Abd al-Karim Qasim. Her mother, Wajiha al-Sabunji, was an artist from Mosul while her brother Foulath Hadid was a writer, accountant and expert on Arab affairs. In the 1960s Hadid attended boarding schools in England and Switzerland.

On 31 March 2016, Hadid died of a heart attack in a Miami hospital, where she was being treated for bronchitis.
The statement issued by her London-based design studio announcing her death read: "Zaha Hadid was widely regarded to be the greatest female architect in the world today". She is buried between her father Mohammed Hadid and brother Foulath Hadid in Brookwood Cemetery in Brookwood, Surrey, England. In her will she left £67m, and bequeathed various amounts to her business partner and family members. Her international design businesses, which accounted for the bulk of her wealth, were left in trust. She was unmarried and had no children.