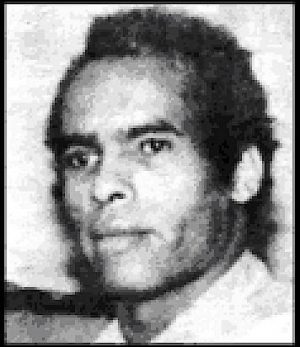 Kuwasi Balagoon (December 22, 1946 – December 13, 1986), born Donald Weems, was a Black Panther, a member of the Black Liberation Army, a New Afrikan anarchist, and a defendant in the Panther 21 case in the late 1960s. Captured and convicted of various crimes, he spent most of the 1970s in prison. Balagoon escaped from prison several times, going underground and resuming BLA activity. He was finally captured and charged with participating in an armoured truck armed robbery, known as the Brinks robbery (1981), in West Nyack, New York, on October 21, 1981, an action in which two police officers, Waverly Brown and Edward O'Grady, and a money courier (Peter Paige) were killed. Convicted of murder and other charges and sentenced to life imprisonment, he died in prison of pneumocystis pneumonia, an AIDS-related illness, on December 13, 1986, aged 39. Balagoon was bisexual.