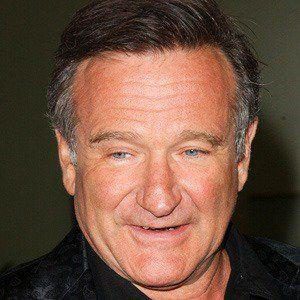 Robin passed away on August 11, 2014 at the age of 63 in Paradise Cay, California, United States. Robin's cause of death was suicide by hanging (asphyxia).

Robin McLaurin Williams was born on Saturday, July 21st, 1951, in Chicago, Illinois, a great-great-grandson of Mississippi Governor and Senator, Anselm J. McLaurin. His mother, Laurie McLaurin (née Janin), was a former model from Mississippi, and his father, Robert Fitzgerald Williams, was a Ford Motor Company executive from Indiana. Williams had English, German, French, Welsh, Irish, and Scottish ancestry.
Williams married his first wife Valerie Velardi in June 1978, following a live-in relationship with comedian Elayne Boosler. Velardi and Williams met in 1976 while he was working as a bartender at a tavern in San Francisco. Their son Zachary Pym "Zak" Williams was born in 1983. Williams and Velardi divorced in 1988.

On April 30, 1989, he married Marsha Garces, Zachary's nanny, who was pregnant with his child. They had two children, Zelda Rae Williams (born 1989) and Cody Alan Williams (born 1991). In March 2008, Garces filed for divorce from Williams, citing irreconcilable differences. Their divorce was finalized in 2010. Williams married his third wife, graphic designer Susan Schneider, on October 22, 2011, in St. Helena, California. The two lived at their house in Sea Cliff, San Francisco, California.
Williams stated, "My children give me a great sense of wonder. Just to see them develop into these extraordinary human beings."
On August 11, 2014, Williams died by suicide at his home in Paradise Cay, California. In the initial report released on August 12, the Marin County Sheriff's Office deputy coroner stated Williams had hanged himself with a belt and died from asphyxiation. The final autopsy report, released in November 2014, affirmed that Williams had committed suicide as initially described; neither alcohol nor illegal drugs were involved, while all prescription drugs present in his body were at "therapeutic" levels. The report also noted that Williams had been suffering "a recent increase in paranoia". An examination of his brain tissue revealed the presence of "diffuse Lewy body dementia", which had been misdiagnosed as Parkinson's disease. Describing the disease as "the terrorist inside my husband's brain", his wife Susan Schneider stated, "however you look at it—the presence of Lewy bodies took his life," referring to his previous diagnosis of Parkinson's. His body was cremated and his ashes were scattered in San Francisco Bay on August 12.