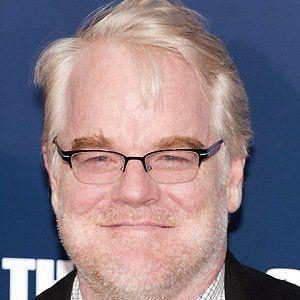 Philip passed away on February 2, 2014 at the age of 46 in Manhattan, New York City, New York, United States. Philip's cause of death was acute mixed drug intoxication, including heroin, cocaine, benzodiazepines and amphetamine..

Film and stage actor and theater director Philip Seymour Hoffman was born in the Rochester, New York, suburb of Fairport on July 23, 1967. He was the son of Marilyn (Loucks), a lawyer and judge, and Gordon Stowell Hoffman, a Xerox employee, and was mostly of German, Irish, English and Dutch ancestry.
After becoming involved in high school theatrics, he attended New York University's Tisch School of the Arts, graduating with a B.F.A. degree in Drama in 1989. He made his feature film debut in the indie production Triple Bogey on a Par Five Hole (1991) as Phil Hoffman, and his first role in a major release came the next year in My New Gun (1992). While he had supporting roles in some other major productions like Scent of a Woman (1992) and Twister (1996), his breakthrough role came in Paul Thomas Anderson's Boogie Nights (1997). He quickly became an icon of indie cinema, establishing a reputation as one of the screen's finest actors, in a variety of supporting and second leads in indie and major features, including Todd Solondz's Happiness (1998), Flawless (1999), The Talented Mr. Ripley (1999), Paul Thomas Anderson's Magnolia (1999), Almost Famous (2000) and State and Main (2000). He also appeared in supporting roles in such mainstream, big-budget features as Red Dragon (2002), Cold Mountain (2003) and Mission: Impossible III (2006). Hoffman was also quite active on the stage. On Broadway, he has earned two Tony nominations, as Best Actor (Play) in 2000 for a revival of Sam Shepard's "True West" and as Best Actor (Featured Role - Play) in 2003 for a revival of Eugene O'Neill (I)'s "Long Day's Journey into Night".

Hoffman rarely mentioned his personal life in interviews, stating in 2012 that he would "rather not because my family doesn't have any choice. If I talk about them in the press, I'm giving them no choice. So I choose not to." For the last 14 years of his life, he was in a relationship with costume designer Mimi O'Donnell, whom he had met in 1999 when they were both working on the play In Arabia We'd All Be Kings, which Hoffman directed. They lived in New York City and had a son, Cooper (2003), and two daughters, Tallulah (2006) and Willa (2008). Hoffman and O'Donnell separated in the fall of 2013, some months before his death.
Hoffman was also discreet about his religious and political beliefs, but it is known that he voted for the Green Party candidate Ralph Nader in the 2000 presidential election. He felt that keeping his personal life private was beneficial to his career: "The less you know about me the more interesting it will be to watch me do what I do".
In a 2006 interview with 60 Minutes, Hoffman revealed he had engaged in drug and alcohol abuse during his time at New York University, saying he had used "anything I could get my hands on. I liked it all." Following his graduation in 1989, he entered a drug rehabilitation program at age 22, and remained sober for 23 years. However, he relapsed in 2013, and admitted himself to drug rehabilitation for about 10 days in May of that year.
Although friends stated that Hoffman's drug use was under control at the time, on February 2, 2014, the actor was found dead in the bathroom of his Manhattan apartment by a friend, playwright and screenwriter David Bar Katz. Hoffman was 46 years old. Detectives searching the apartment found heroin and prescription medications at the scene, and revealed that he was discovered with a syringe in his arm. The death was officially ruled an accident caused by "acute mixed drug intoxication, including heroin, cocaine, benzodiazepines, and amphetamine". Whether Hoffman had taken all of the substances on the same day, or whether any of the substances had remained in his system from earlier use was not determined. A funeral was held at St. Ignatius Loyola Church in Manhattan on February 7, 2014, and was attended by many of his former co-stars.
Hoffman's unexpected death was widely lamented by fans and the film industry, and was described by several commentators as a considerable loss to the profession. On February 5, 2014, the LAByrinth Theatre Company honored his memory by holding a candlelight vigil, and Broadway dimmed its lights for one minute. In another tribute, actress Cate Blanchett dedicated her BAFTA trophy to Hoffman when she received the award for Blue Jasmine on February 16. Three weeks after Hoffman's death, David Bar Katz established the American Playwriting Foundation in the actor's memory. With the money received from a libel lawsuit against the National Enquirer (which had inaccurately published that Hoffman and Katz were lovers), the foundation awards an annual prize of US$45,000 to the author of an unproduced play. Katz named this the "Relentless Prize" in honor of Hoffman's dedication to the profession. Hoffman left his fortune, around US$35 million, to Mimi O'Donnell in his October 2004 will, trusting her to distribute money to their children.
At the 2018 Academy Awards, Sam Rockwell dedicated his win for Best Supporting Actor to him, stating at the end of his acceptance speech "This is for my buddy, Phil Hoffman. For Phil Hoffman".