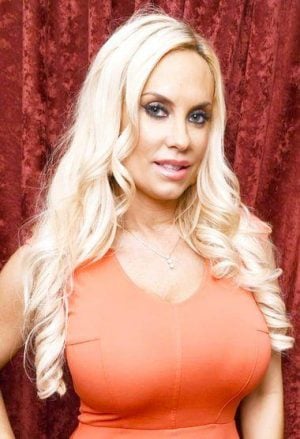 Nicole is alive and kicking and is currently 43 years old.
Please ignore rumors and hoaxes.
If you have any unfortunate news that this page should be update with, please let us know using this .

Does Coco Austin Have the coronavirus?

Nicole Marrow, commonly known as Coco Austin, Coco, Coco Marie Austin, Coco Marie, Coco-T, is an American actress, dancer, glamour model and web personality. She has been married to rapper-actor Ice-T since January 2002.
Austin was born in Tarzana, California, and raised in nearby Palos Verdes. She has Serbian ancestry through maternal grandparents born in Serbia. Austin also has a younger sister Kristy Williams and three younger brothers. As a small child, her brother would mispronounce her name, saying "Cole Cole" or "Co-co" in place of "Nicole". Eventually her family began addressing her as Coco. The family moved to Albuquerque, New Mexico when she was 10. She grew up as a tomboy, riding all-terrain vehicles and playing football. Austin began dancing (jazz, tap and ballet).

She was featured in a layout in the March 2008 issue of Playboy magazine and had a role in the film Thira (a.k.a. Santorini Blue, which co-starred her husband). Austin appeared on NBC's game show Celebrity Family Feud on June 24, 2008 (with winnings donated to charity). She and her husband, rapper-actor Ice-T, competed against Joan Rivers and Melissa Rivers.
Austin and rapper-actor Tracy "Ice-T" Marrow were married in January 2002. They renewed their vows in Hollywood on June 4, 2011. As of 2006 they owned a penthouse apartment in North Bergen, New Jersey. In 2012 they were building a five-bedroom house in Edgewater, New Jersey, that was expected to be completed by the end of the year. In November 2015, the couple announced that their child Chanel had been born.