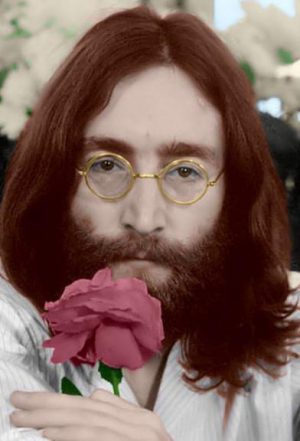 John passed away on December 8, 1980 at the age of 40 in New York City, New York, USA. John's cause of death was murdered by gunshot.

Famed singer-songwriter John Lennon founded the Beatles, a band that impacted the popular music scene like no other before, or since.
John Lennon was born on October 9, 1940, in Liverpool, England. He met Paul McCartney in 1957 and invited McCartney to join his music group. They eventually formed the most successful songwriting partnership in musical history. Lennon left the Beatles in 1969 and later released albums with his wife, Yoko Ono, among others. On December 8, 1980, he was killed by a crazed fan named Mark David Chapman.

Famed singer-songwriter John Winston Lennon was born on October 9, 1940, in Liverpool, Merseyside, England, during a German air raid in World War II.
When he was four years old, Lennon's parents separated and he ended up living with his Aunt Mimi. Lennon's father was a merchant seaman. He was not present at his son's birth and did not see a lot of his son when he was young.
Lennon's mother, Julia, remarried, but visited him and Mimi regularly. She taught Lennon how to play the banjo and the piano and purchased his first guitar. Lennon was devastated when Julia was fatally struck by a car driven by an off-duty police officer in July 1958. Her death was one of the most traumatic events in his life.
As a child, Lennon was a prankster and he enjoyed getting into trouble. As a boy and young adult, he enjoyed drawing grotesque figures and cripples. Lennon's school master thought that he could go to an art school for college, since he did not get good grades in school but had artistic talent.
After an evening at the Record Plant on 8 December 1980, Lennon and Ono returned to their Manhattan apartment in a limousine at around 10:50 p.m. (EST). They exited the vehicle and walked through the archway of Dakota when lone gunman Mark David Chapman shot Lennon four times in the back at close range. Lennon was rushed in a police cruiser to the emergency room of nearby Roosevelt Hospital, where he was pronounced dead on arrival at 11:00 p.m. (EST). Earlier that evening, Lennon had autographed a copy of Double Fantasy for Chapman.
Ono issued a statement the next day, saying "There is no funeral for John", ending it with the words, "John loved and prayed for the human race. Please do the same for him." His remains were cremated at Ferncliff Cemetery in Hartsdale, New York. Ono scattered his ashes in New York's Central Park, where the Strawberry Fields memorial was later created. Chapman avoided going to trial when he ignored his attorney's advice and pleaded guilty to second-degree murder and was sentenced to 20-years-to-life. In 2016, he was denied parole for a ninth time.