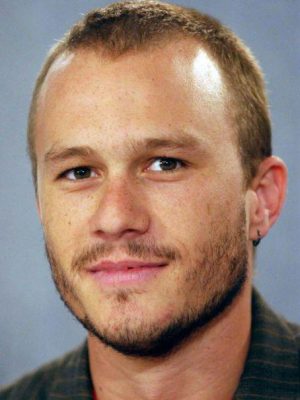 Heathcliff passed away on January 22, 2008 at the age of 28 in Soho, New York. Heathcliff's cause of death was accidental sleeping pill overdose.

When hunky, twenty-year-old heart-throb Heath Ledger first came to the attention of the public in 1999, it was all too easy to tag him as a "pretty boy" and an actor of little depth. He spent several years trying desperately to sway this image, but this was a double-edged sword. His work comprised nineteen films, including 10 Things I Hate About You (1999), The Patriot (2000), A Knight's Tale (2001), Monster's Ball (2001), Ned Kelly (2003), The Brothers Grimm (2005), Lords of Dogtown (2005), Brokeback Mountain (2005), Casanova (2005), Candy (2006), I'm Not There. (2007), The Dark Knight (2008) and The Imaginarium of Doctor Parnassus (2009). He also produced and directed music videos and aspired to be a film director.
Ledger was an avid chess player, winning Western Australia's junior chess championship at the age of 10. As an adult, he often played with other chess enthusiasts at Washington Square Park. Ledger also had a keen interest in the West Coast Eagles, a professional Australian rules football team that competes in the Australian Football League and are based in his hometown of Perth. Allan Scott's film adaptation of the chess-related 1983 novel The Queen's Gambit, by Walter Tevis, which at the time of his death he was planning to both perform in and direct, would have been Ledger's first feature film as a director.

Ledger had relationships with actresses Lisa Zane, Heather Graham and Naomi Watts. In 2004, he met and began dating actress Michelle Williams on the set of Brokeback Mountain. Their daughter, Matilda Rose, was born on 28 October 2005 in New York City. Matilda's godparents are Brokeback co-star Jake Gyllenhaal and Williams' Dawson's Creek co-star Busy Philipps. In January 2006, Ledger put his residence in Bronte, New South Wales up for sale, and returned to the United States, where he shared a house with Williams, in Boerum Hill, Brooklyn, from 2005 to 2007. In September 2007, Williams' father confirmed to Sydney's Daily Telegraph that Ledger and Williams had ended their relationship. After Ledger’s death, multiple news outlets reported that his drug abuse had prompted Williams to request that he move out of the apartment they shared in Brooklyn.
After his break-up with Williams, in late 2007 and early 2008, the tabloid press and other public media linked Ledger romantically with supermodels Helena Christensen and Gemma Ward. On 30 January 2011, Ward stated that the pair began dating in November 2007 and their families spent Christmas together in their home town of Perth.
In their New York Times interview, published on 4 November 2007, Ledger told Sarah Lyall that his recently completed roles in I'm Not There (2007) and The Dark Knight (2008) had taken a toll on his ability to sleep: "Last week I probably slept an average of two hours a night. ... I couldn't stop thinking. My body was exhausted, and my mind was still going." At that time, he told Lyall that he had taken two Ambien pills, after taking just one had not sufficed, and those left him in "a stupor, only to wake up an hour later, his mind still racing."
Prior to his return to New York from his last film assignment, in London, in January 2008, while he was apparently suffering from some kind of respiratory illness, he reportedly complained to his co-star from The Imaginarium of Doctor Parnassus, Christopher Plummer, that he was continuing to have difficulty sleeping and taking pills to help with that problem: "Confirming earlier reports that Ledger hadn't been feeling well on set, Plummer says, 'we all caught colds because we were shooting outside on horrible, damp nights. But Heath's went on and I don't think he dealt with it immediately with the antibiotics.... I think what he did have was the walking pneumonia.' On top of that, 'He was saying all the time, 'dammit, I can't sleep'... and he was taking all these pills to help him.' "
In talking with Interview magazine, after his death, Ledger's former fiancée Michelle Williams also confirmed reports the actor had experienced trouble sleeping. "For as long as I'd known him, he had bouts with insomnia. He had too much energy. His mind was turning, turning, turning – always turning."
At about 2:45 pm (EST), on 22 January 2008, Ledger was found unconscious in his bed by his housekeeper, Teresa Solomon, and his masseuse, Diana Wolozin, in his fourth-floor loft apartment at 421 Broome Street in the SoHo neighbourhood of Manhattan.
According to the police, Wolozin, who had arrived early for a 3:00 pm appointment with Ledger, called Ledger's friend Mary-Kate Olsen for help. Olsen, who was in California, directed a New York City private security guard to go to the scene. At 3:26 pm, "less than 15 minutes after she first saw him in bed and only a few moments after the first call to Ms. Olsen", Wolozin telephoned 9-1-1 "to say that Mr. Ledger was not breathing". At the urging of the 9-1-1 operator, Wolozin administered CPR, which was unsuccessful in reviving him.
Paramedics and emergency medical technicians arrived seven minutes later, at 3:33 pm ("at almost exactly the same moment as a private security guard summoned by Ms. Olsen") but were also unable to revive him. At 3:36 pm, Ledger was pronounced dead, and his body was removed from the apartment.