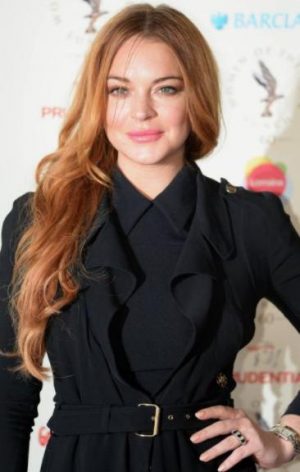 Lindsay is alive and kicking and is currently 36 years old.
Please ignore rumors and hoaxes.
If you have any unfortunate news that this page should be update with, please let us know using this .

Does Lindsay Lohan Have the coronavirus?

Lindsay Lohan's father, Michael Lohan, is still alive and kicking at the age of 62. He is American and has had a career as a wall street trader, tv personality.

Lindsay Lohan's mother, Dina Lohan, is still alive and kicking at the age of 59. She is American and has had a career as a personality.

Lindsay Dee Lohan is an American actress and singer. Lohan began her career as a child fashion model when she was three, and was later featured on the soap opera Another World for a year when she was 10. At age 11, Lohan made her motion picture debut in Disney's commercially and critically successful 1998 remake of The Parent Trap.
Lohan has been the face of Jill Stuart, Miu Miu, and, as well as the 2008 Visa Swap British fashion campaign. She was also the face of Italian clothing company Fornarina for its Spring–Summer 2009 campaign. Lohan has a long-lasting fascination with Marilyn Monroe going back to when she saw Niagara during The Parent Trap shoot. In the 2008 Spring Fashion edition of New York magazine, Lohan re-created Monroe's final photo shoot, known as The Last Sitting, including nudity, saying that the photo shoot was "an honor." The New York Times critic Ginia Bellafante found it disturbing, saying "the pictures ask viewers to engage in a kind of mock necrophilia. ... [and] the photographs bear none of Monroe's fragility."

Lohan began dating actor Wilmer Valderrama in 2004. She also guest-starred in an episode of That '70s Show, where Valderrama was a regular. After their break-up, Lohan wrote her second single, "Over", about the experience. Lohan dated Hard Rock Cafe heir Harry Morton in 2006. Lohan dated DJ Samantha Ronson in 2008 and 2009. She co-hosted club events with Ronson and accompanied her when she was DJ-ing. In April 2009, following her breakup with Ronson, Lohan appeared in a dating video spoof on the comedy website Funny or Die. It was viewed 2.7 million times in the first week and received favorable comments from the media. As of 2016, her love interest and fiancé was London based Russian millionaire Egor Tarabasov, owner of the real estate agency Home House Estates and son of Dmitry Tarabasov. They reportedly broke up in mid 2017 with Lindsay accusing Egor of abuse and him accusing her of stealing £24,000 worth of his belongings.
Lohan spoke about her turbulent childhood in 2007, the same year her parents finalized their divorce: "I feel like a second parent in the sense that I helped raise my family...I was put between my mother and father a lot." Despite the conflicts, Lohan spoke very fondly of her family. However, in 2007, 2008, and 2009 she admitted that she had cut off contact with her father, describing his behavior as unpredictable and hard to deal with.