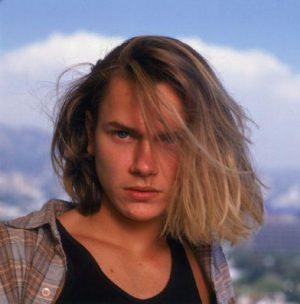 River passed away on October 31, 1993 at the age of 23 in West Hollywood, Los Angeles, California, United States. River's cause of death was drug overdose.

River Phoenix was an Academy Award nominee and promising young actor who died at the young age of 23 from a drug overdose. River Phoenix was born on August 23, 1970 in Madras, Oregon. His breakthrough film role was in "Stand by Me" based on a novella by Stephen King. He earned an Academy Award nomination for "Running on Empty" directed by Sydney Lumet. Phoenix also starred as the young Indy in the film "Indiana Jones and the Last Crusade." Phoenix died of a drug overdose outside West Hollywood's Viper Room in 1993.
On the evening of October 30, 1993, Phoenix was to perform with his close friend Flea from the Red Hot Chili Peppers onstage at The Viper Room, a Hollywood nightclub partly owned at the time by actor Johnny Depp. Phoenix had returned to Los Angeles early that week from Utah to complete the three weeks of interior shots left on his last project, Dark Blood, a film that was finally completed in 2012. His younger sister Rain and brother Joaquin joined him at the Hotel Nikko (now the SLS Hotel) on La Cienega Boulevard. Phoenix's girlfriend Samantha Mathis also had come to meet him. All were present at the scene of Phoenix's death.

During the early morning hours of October 31, 1993, Phoenix suffered a drug overdose, and collapsed outside and convulsed for over five minutes. When his brother Joaquin called 9-1-1, he was unable to determine whether Phoenix was breathing. His sister Rain proceeded to give him mouth-to-mouth resuscitation.
During the episode, Johnny Depp and his band P (featuring Flea and Phoenix's friend Gibby Haynes of the Butthole Surfers) were onstage. According to Haynes, the band was in the middle of their song "Michael Stipe" while Phoenix was outside the venue having seizures on the sidewalk. When the news filtered through the club, Flea left the stage and rushed outside. By that time, paramedics had arrived on the scene and found Phoenix turning dark blue, in full cardiac arrest and in a flatline state. They administered medication in an attempt to restart his heart. He was rushed to the Cedars-Sinai Medical Center, accompanied by Flea, via an ambulance. Further attempts to resuscitate Phoenix were unsuccessful. He was pronounced dead at 1:51 a.m. PST on the morning of October 31, 1993 at the age of 23.
The following day the club became a makeshift shrine with fans and mourners leaving flowers, pictures and candles on the sidewalk and graffiti messages on the walls of the venue. A sign was placed in the window that read, "With much respect and love to River and his family, The Viper Room is temporarily closed. Our heartfelt condolences to all his family, friends and loved ones. He will be missed." The club remained closed for a week. Depp continued to close the club every year on October 31 until selling his share in 2004.
Before his death, Phoenix's image—one he bemoaned in interviews—had been squeaky-clean, owing in part to his public dedication to his various social, political, humanitarian, and dietary interests not always popular in the 1980s. As a result, his death elicited a vast amount of coverage from the media. Phoenix was described by one writer as "the vegan James Dean," and comparisons were made regarding the youth and sudden deaths of both actors.
The November 15, 1993 autopsy found that "Toxicology studies showed high concentrations of morphine and cocaine in the blood, as well as other substances in smaller concentrations." The cause of death was "acute multiple drug intoxication", including cocaine and morphine.
Joaquin's call to 9-1-1 was recorded and broadcast by several radio and TV shows. Following his death, media actively violated the family's privacy, including breaking into the Miami funeral home and taking a picture of Phoenix’s body in his casket. The picture was sold to the National Enquirer. Joaquin was so upset that he walked away from Hollywood for a second time.
On November 24, 1993, Arlyn "Heart" Phoenix published an open letter in the Los Angeles Times on her son's life and death. It read, in part:
"His friends, co-workers and the rest of our family know that River was not a regular drug user. He lived at home in Florida with us and was almost never a part of the "club scene" in Los Angeles. He had just arrived in L.A. from the pristine beauty and quietness of Utah where he was filming for six weeks. We feel that the excitement and energy of the Halloween nightclub and party scene were way beyond his usual experience and control. How many other beautiful young souls, who remain anonymous to us, have died by using drugs recreationally? It is my prayer that River's leaving in this way will focus the attention of the world on how painfully the spirits of his generation are being worn down."
River made such a big impression during his life on Earth. He found his voice and found his place. And even River, who had the whole world at his fingertips to listen, felt deep frustration that no one heard. What is it going to take? Chernobyl wasn't enough. Exxon Valdez wasn't enough. A bloody war over oil wasn't enough. If River's passing opens our global heart, then I say, thanks dear, beloved son, for yet another gift to all of us.
Phoenix was cremated and his ashes were scattered at his family ranch in Micanopy, Florida. Following his death, Aleka's Attic disbanded.