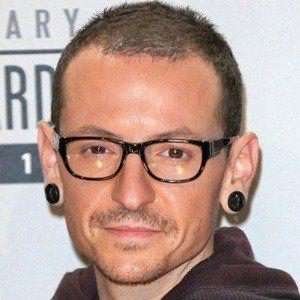 Chester passed away on July 20, 2017 at the age of 41 in Palos Verdes Estates, California. Chester's cause of death was apparent suicide.

Chester Charles Bennington (March 20, 1976 – July 20, 2017) was an American singer, songwriter, musician and actor best known as the frontman for the rock band Linkin Park. He was the lead singer for Dead by Sunrise and fronted Stone Temple Pilots from 2013 to 2015.Bennington first gained prominence as a vocalist following the release of Linkin Park's debut album, Hybrid Theory, in 2000, which became a commercial success. The album was certified Diamond by the Recording Industry Association of America in 2005, making it the best-selling debut album of the decade, as well as one of the few albums to ever hit that many sales. Linkin Park's following studio albums, from Meteora (2003) to One More Light (2017), continued the band's success.
Bennington formed his own band, Dead by Sunrise, as a side project in 2005. The band's debut album, Out of Ashes, was released on October 13, 2009. He worked on new material with Stone Temple Pilots in 2013 to release the EP High Rise on October 8, 2013 via their own record label, Play Pen. Bennington has been ranked in the Top 100 Heavy Metal Vocalists by Hit Parader (No. 46).

Bennington had a child, Jaime (born May 12, 1996), from his relationship with Elka Brand. In 2006, he adopted Brand's other son, Isaiah (born November 8, 1997). He married his first wife, Samantha Marie Olit, on October 31, 1996. They had one child together, Draven Sebastian (born April 19, 2002). Bennington's relationship with his first wife declined during his early years with Linkin Park, and they divorced in 2005. In 2006, he married Talinda Ann Bentley, a former Playboy model with whom he had three children: Tyler Lee Bennington (born March 16, 2006) and twins Lilly and Lila (born November 6, 2011).
Bennington and his wife were harassed by a cyberstalker named Devon Townsend (not to be confused with Canadian musician Devin Townsend) for almost a year. Townsend was found guilty of tampering with the couple's email, as well as sending threatening messages, and was later sentenced to two years in prison.
Bennington was a tattoo enthusiast. He had done work and promotions with Club Tattoo, a tattoo parlor in Tempe, Arizona. Club Tattoo is owned by Sean Dowdell, Bennington's friend since high school with whom he played in two bands. Bennington was a fan of the Phoenix Suns, Arizona Cardinals, Arizona Diamondbacks, and Arizona Coyotes.
In a January 2011 interview, in response to the 2011 Tucson shooting, Bennington said, "There's a non-violent way to express yourself and get your point across – regardless of what you're saying or what your point is. In a free society, people have a right to believe whatever they want to believe. That's their business and they can speak their mind. But nobody, even in a free society, has the right to take another person's life. Ever. That's something that we really need to move beyond.
Bennington was found dead at his home in Palos Verdes Estates, California; his housekeeper discovered his body around 9:00 a.m. PDT on July 20, 2017. His death was ruled as suicide by hanging. Mike Shinoda confirmed his death on Twitter, writing, "Shocked and heartbroken, but it's true. An official statement will come out as soon as we have one". On July 21, Brian Elias, the chief of operations for the office of the medical examiner-coroner, confirmed that a half-empty bottle of alcohol was found at the scene, but no other drugs were present. The band announced that they had canceled the North American leg of their One More Light Tour following Bennington's death and that tickets would be refunded.
Bennington's funeral was held at South Coast Botanic Garden in Palos Verdes, California, on July 29. In addition to his family members and close friends, many musicians who toured or played with Linkin Park were also in attendance. The service also included a full stage for musical tributes. Bennington was cremated.
On December 5, 2017, Billboard magazine wrote that Bennington's toxicology report showed "a trace amount" of alcohol in the singer's system at the time of death.