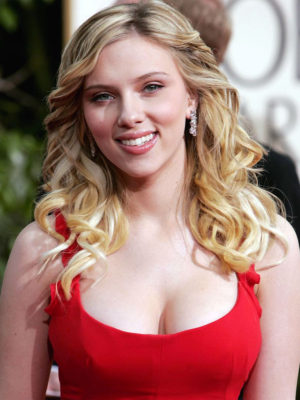 Scarlett is alive and kicking and is currently 37 years old.
Please ignore rumors and hoaxes.
If you have any unfortunate news that this page should be update with, please let us know using this .

Does Scarlett Johansson Have the coronavirus?

Scarlett Ingrid Johansson is an American actress and singer. Johansson is the world's highest-paid actress, has made multiple appearances in the Forbes Celebrity 100, and has a star on the Hollywood Walk of Fame. She aspired to be an actress from a young age, and first appeared on stage in an Off-Broadway play as a child. Johansson made her film debut in the fantasy comedy North (1994), and was nominated for an Independent Spirit Award for Manny & Lo (1996). She gained further recognition for her work in The Horse Whisperer (1998) and Ghost World (2001).
As a public figure, Johansson is a Hollywood sex symbol. She is a prominent celebrity brand endorser, and also supports various charities and causes. She has been married twice, to the Canadian actor Ryan Reynolds from 2008 to 2011 and the French businessman Romain Dauriac (with whom she has a daughter) from 2014 to 2017.

While attending PCS, Johansson dated classmate Jack Antonoff from 2001 to 2002. She dated her Black Dahlia co-star Josh Hartnett for about two years until the end of 2006; Hartnett said they split because their busy schedules kept them apart. Johansson began a relationship with Canadian actor Ryan Reynolds in 2007; they became engaged in May 2008, married in September 2008, separated in December 2010, and divorced in July 2011.
In November 2012, Johansson started dating Frenchman Romain Dauriac, the owner of an advertising agency; they became engaged the following September. The couple divided their time between New York City and Paris. In 2014, she gave birth to their daughter, Rose Dorothy Dauriac. Johansson and Dauriac married that October in Philipsburg, Montana. They separated in mid-2016, and divorced in September 2017. It was confirmed in December 2017 that Johansson had begun a relationship with Saturday Night Live co-head writer and "Weekend Update" co-host Colin Jost.