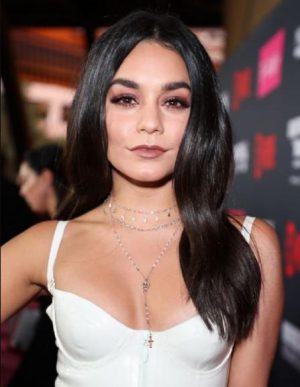 Vanessa is alive and kicking and is currently 33 years old.
Please ignore rumors and hoaxes.
If you have any unfortunate news that this page should be update with, please let us know using this .

Does Vanessa Hudgens Have the coronavirus?

Vanessa Anne Hudgens is an American actress and singer. Hudgens rose to prominence playing Gabriella Montez in the High School Musical series. Hudgens has also appeared in various films and television series for the Disney Channel. She had her feature film debut in the 2003 film Thirteen, a teenage drama in which Hudgens had a supporting role. She had mainstream success following the release of the High School Musical trilogy, and her relationship with co-star Zac Efron was heavily publicized.
Her appearance in the series helped make her a household name. Songs from the films also charted worldwide, with the song "Breaking Free" peaking inside the Top 10 of the Billboard Hot 100. This led to Hudgens releasing her debut album, V, on September 26, 2006 which entered the Billboard 200 at number 24, and was later certified gold. Her second album, Identified, was released on July 1, 2008 in the United States.

Hudgens began a relationship with High School Musical co-star Zac Efron in 2005. The couple became a frequent target for the media, and in turn the BBC predicted that Hudgens would be a "household name" in the US. They ended their relationship after five years in December 2010. Hudgens is a close friend of actress Ashley Tisdale, whom she met when they both appeared in the film High School Musical; Hudgens was a bridesmaid at Tisdale's wedding on September 8, 2014.
Hudgens has been in a relationship with Austin Butler since 2011.