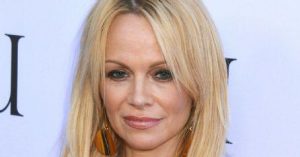 Pamela is alive and kicking and is currently 54 years old.
Please ignore rumors and hoaxes.
If you have any unfortunate news that this page should be update with, please let us know using this .

Does Pamela Anderson Have the coronavirus?

Pamela Denise Anderson is a Canadian-American actress. In addition to her acting career, she is also a model, producer, author, activist and a former showgirl, known for her roles on the television series Home Improvement, Baywatch and V.I.P.. She was chosen as a Playmate of the Month for Playboy magazine in February 1990. For a time, she was known as Pamela Anderson Lee after marrying Mötley Crüe drummer Tommy Lee. Anderson is a member of the animal rights movement and has conducted campaigns condemning the commercial fur industry and promoting veganism through the animal welfare organization People for the Ethical Treatment of Animals. In 2006, she was inducted into Canada's Walk of Fame.
Anderson married Tommy Lee, drummer of Mötley Crüe, on February 19, 1995, after knowing him for about 96 hours, or 4 days. They have two sons together: Brandon Thomas (born June 5, 1996) and Dylan Jagger (born December 29, 1997). During their tumultuous marriage, Lee was arrested for spousal abuse after assaulting Anderson. He was sentenced to six months in the Los Angeles County Jail. The couple divorced in 1998.

After the 1998 divorce, Anderson became engaged to the model Marcus Schenkenberg; they broke up in 2001. She then became engaged to the singer Kid Rock (Robert J. Ritchie); she broke up with him in 2003. On July 18, 2006, it was announced that she would marry Kid Rock on July 29, 2006, on a yacht near Saint-Tropez, France. On November 27, 2006, Anderson filed for divorce in Los Angeles County Superior Court, citing irreconcilable differences. Some news reports have suggested that Kid Rock's outrage during a screening of Borat, in which Anderson has a cameo role, led to the filing for divorce two weeks later.
In September 2007, Anderson stated on The Ellen DeGeneres Show that she was engaged. On September 29, Anderson and film producer Rick Salomon applied for a marriage license in Las Vegas. On October 6, 2007, Anderson married Salomon in a small wedding ceremony at The Mirage, between her two nightly appearances at the Planet Hollywood Resort and Casino in Hans Klok's magic show. The couple separated on December 13, and on February 22, 2008, Anderson requested through the courts that the marriage be annulled, citing fraud. In October 2013, Anderson stated on The Ellen DeGeneres Show that she and Salomon were "friends with benefits". In January 2014, she announced that she had remarried Salomon on an unspecified date. Anderson filed for divorce from Salomon in February 2015. The divorce was finalized on April 29, 2015.
Anderson has been dating French footballer Adil Rami since 2017.