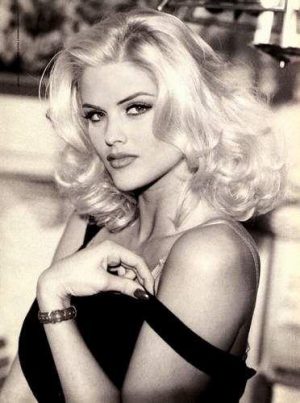 Anna passed away on February 8, 2007 at the age of 39 in Hollywood, Florida, USA. Anna's cause of death was drug overdose.

Anna Nicole Smith gained early fame as a model for Guess and 'Playboy' magazine, and later became known for her marriage to 89-year-old oil tycoon J. Howard Marshall II. Born on November 28, 1967, in Mexia, Texas, Anna Nicole Smith rose to fame as a model. She was named Playboy's Playmate of the Year in 1993. In 1994, she wed 89-year-old oil tycoon J. Howard Marshall II, who soon died. Smith spent years fighting for a share of her late husband's estate. She starred in her own reality show from 2002 to 2004. Smith died of an accidental drug overdose in 2007.
On February 8, 2007, Smith was found dead in Room 607 at the Seminole Hard Rock Hotel and Casino in Hollywood, Florida. Tasma Brighthaupt, a friend of Smith who was a trained emergency nurse, performed CPR for 15 minutes until her husband, Maurice "Big Moe" Brighthaupt (Smith's friend and bodyguard) took over CPR. He had driven back to the hotel after being notified by his wife of Smith's condition. According to Seminole Police Chief Charlie Tiger, at 1:38 p.m. (EST) Maurice Brighthaupt, who was also a trained paramedic, called the hotel front desk from Smith's sixth-floor room. The front desk in turn called security, who then called 911. At 1:45 p.m. (EST) the bodyguard administered CPR until paramedics arrived. At 2:10 p.m. (EST), Smith was rushed to Memorial Regional Hospital, where she was pronounced dead on arrival at 2:49 p.m. (EST)

A phone call involving Seminole police and the local 911 operators was released to the public on February 13, 2007. The call said, "We need assistance to Room 607 at the Hard Rock. It's in reference to a white female. She's not breathing and not responsive... actually, it's Anna Nicole Smith."
A seven-week investigation was led by Broward County Medical Examiner and Forensic Pathologist Joshua Perper in combination with the Seminole police and several independent forensic pathologists and toxicologists. Perper announced that Smith died of "combined drug intoxication" with the sleeping medication chloral hydrate as the "major component." No illegal drugs were found in her system. The official report states that her death was not considered to be due to homicide, suicide, or natural causes. The full investigative report has been made public and can be found online. Additionally, an official copy of the autopsy report was publicly released on March 26, 2007, and can be found online.
Her death was ultimately ruled an accidental drug overdose of the sedative chloral hydrate that became increasingly lethal when combined with other prescription drugs in her system, specifically four benzodiazepines: Klonopin (Clonazepam), Ativan (Lorazepam), Serax (Oxazepam), and Valium (Diazepam). Furthermore, she had taken Benadryl (Diphenhydramine) and Topamax (Topiramate), an anticonvulsant AMPA/Kainate antagonist, which likely contributed to the sedative effect of chloral hydrate and the benzodiazepines. Although the individual levels of any of the benzodiazepines in her system would not have been sufficient to cause death, their combination with a high dose of chloral hydrate led to her overdose. The autopsy report indicates that chloral hydrate was the "toxic/lethal" drug, but it is difficult to know whether chloral hydrate ingestion alone would have killed her, since Dr. Perper indicated (in the March 26 press conference) that she had built up a tolerance to the drug and took more than the average person. He indicated that she took about three tablespoons, whereas the normal dosage is between one and two teaspoons. Chloral hydrate, first synthesized in 1832, was the first depressant developed for the specific purpose of inducing sleep. The infamous "Mickey Finn" or "knockout drops" was a solution of alcohol and chloral hydrate that was popular in Victorian England and in that era's literature. When used properly, and without the introduction of alcohol or other depressants, chloral hydrate is effective in easing sleeplessness due to pain or insomnia. But according to Avis (1990), the effective dose and lethal dose of chloral hydrate are so close that the sedative should be considered dangerous. Today, the use of chloral hydrate has declined as other agents, including barbiturates and benzodiazepines, have largely replaced them. Despite rumors of methadone use due to its involvement in Smith's son's death, Dr. Perper only found methadone in her bile, indicating it could only have been ingested 2–3 days prior to her death and therefore was not a contributing factor. The autopsy report indicates that abscesses on her buttocks (presumably from prior injections of vitamin B12 in the form of cyanocobalamin, as well as human growth hormone), and viral enteritis were contributory causes of death. Tests for influenza A and B were negative.
It was reported that 8 of the 11 drugs in Smith's system, including the chloral hydrate, were prescribed to Howard K. Stern, not Smith. Additionally, two of the prescriptions were written for Alex Katz and one was written for Smith's friend and psychiatrist, Dr. Khristine Elaine Eroshevich. Dr. Perper acknowledged that all 11 prescriptions were written by Dr. Eroshevich herself. Smith's funeral took place March 2, 2007.