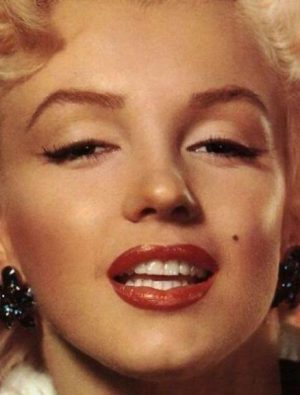 Marilyn passed away on August 5, 1962 at the age of 36 in Brentwood, CA, USA. Marilyn's cause of death was barbiturate overdose.

The Los Angeles County Coroners Office was assisted in their investigation by psychiatrists from the Los Angeles Suicide Prevention Team, who had expert knowledge on suicide. It was estimated that Monroe had died between 8:30 p.m. and 10:30 p.m. on August 5, and the toxicology report later revealed that the cause of death was acute barbiturate poisoning. She had 8 mg% (milligrams per 100 milliliters of solution) chloral hydrate and 4.5 mg% of pentobarbital (Nembutal) in her blood, and a further 13 mg% of pentobarbital in her liver. Empty bottles containing these medicines were found next to her bed. The possibility that Monroe had accidentally overdosed was ruled out, because the dosages found in her body were several times over the lethal limit. Her doctors stated that she had been "prone to severe fears and frequent depressions" with "abrupt and unpredictable mood changes", and had overdosed several times in the past, possibly intentionally. Due to these facts and the lack of any indication of foul play, the coroner classified her death as a probable suicide.
Monroe was an international star and her sudden death was front-page news in the United States and Europe. According to Lois Banner, "it's said that the suicide rate in Los Angeles doubled the month after she died; the circulation rate of most newspapers expanded that month", and the Chicago Tribune reported that they had received hundreds of phone calls from members of the public who were requesting information about her death. French artist Jean Cocteau commented that her death "should serve as a terrible lesson to all those, whose chief occupation consists of spying on and tormenting film stars", her former co-star Laurence Olivier deemed her "the complete victim of ballyhoo and sensation", and Bus Stop director Joshua Logan stated that she was "one of the most unappreciated people in the world". Her funeral, held at the Westwood Village Memorial Park Cemetery on August 8, was private and attended by only her closest associates. The service was arranged by Joe DiMaggio and her business manager Inez Melson. Hundreds of spectators crowded the streets around the cemetery. Monroe was later entombed at crypt No. 24 at the Corridor of Memories.
In the following decades, several conspiracy theories— including murder and accidental overdose—have been introduced to contradict suicide as the cause of Monroe's death. The speculation of murder first gained mainstream attention with the publication of Norman Mailer's Marilyn: A Biography in 1973, and in the following years became widespread enough for the Los Angeles County District Attorney John Van de Kamp to conduct a "threshold investigation" in 1982 to see whether a criminal investigation should be opened. No evidence of foul play was found.