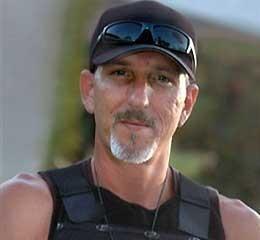 Tim is alive and kicking and is currently 57 years old.
Please ignore rumors and hoaxes.
If you have any unfortunate news that this page should be update with, please let us know using this .

Does Tim Chapman Have the coronavirus?

Timothy Charles "Youngblood" Chapman (born May 13, 1965 in Ventura, California, USA) is a retired American bounty hunter, most noted for his role on A&E TV's Dog the Bounty Hunter, in which he along with Duane "Dog" Chapman and Dog's family track down and capture wanted fugitives.
On September 14, 2006, Tim Chapman was arrested along with Duane "Dog" Chapman and Leland Chapman by U.S. Marshals at the request of the Mexican government, and were to be extradited to Mexico to face charges of "deprivation of liberty". The charges stem from an incident where Chapman, Dog, and Leland were chasing fugitive and serial rapist Andrew Luster, the Max Factor Cosmetics heir. They captured Luster on June 18, 2003 in Puerto Vallarta, Mexico. Shortly after the capture, the three were themselves arrested by Puerto Vallarta police officers; the three posted bail but never returned to Mexico for their court hearing on July 15, 2003.

In January 2008, prosecutors charged Tim Chapman with first-degree "terroristic threatening" following an incident at the Ala Moana Center in Honolulu, Hawaii. He was also charged with indecent exposure. Police and prosecutors stated that security guards recognized Chapman from his role of the show Dog the Bounty Hunter when they responded to a report of a man fondling himself in a vehicle at a parking lot around 9 P.M. on January 3, 2008.