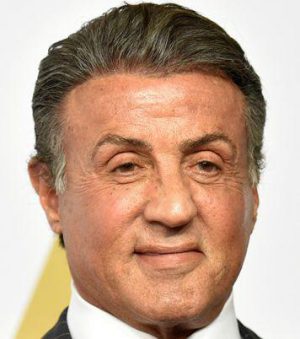 Sylvester is alive and kicking and is currently 75 years old.
Please ignore rumors and hoaxes.
If you have any unfortunate news that this page should be update with, please let us know using this .

Does Sylvester Stallone Have the coronavirus?

One of the most popular action stars in cinematic history, Oscar nominee Sylvester Stallone is best known for portraying boxer Rocky Balboa and Vietnam War veteran John Rambo.
Born on July 6, 1946, in New York City, Sylvester Stallone rose to fame as the writer and lead of the Academy Award-winning boxing film Rocky (1976). He went on to become one of the biggest action stars in the world, reprising his characters from Rocky and First Blood (1982) for several sequels. Following a mid-career decline, he rediscovered box-office success with The Expendables (2010) and earned critical acclaim for reviving the Rocky franchise with Creed (2015), garnering his first Golden Globe win and another Oscar nomination.

Stallone has been married three times. At age 28, on December 28, 1974, he married Sasha Czack from Pennsylvania. The couple had two sons, Sage Moonblood (May 5, 1976 – July 13, 2012), who died of heart disease at age 36, and Seargeoh (b. 1979). His younger son was diagnosed with autism at an early age. The couple divorced on February 14, 1985. He married model and actress Brigitte Nielsen on December 15, 1985, in Beverly Hills, California. Stallone and Nielsen's marriage, which lasted two years, and their subsequent divorce, were highly publicized by the tabloid press. In May 1997, Stallone married Jennifer Flavin, with whom he has three daughters: Sophia, Sistine, and Scarlet. His daughters were chosen to be Miss Golden Globe at the 74th Golden Globe Awards.
Stallone was engaged to a former partner, Janice Dickinson, but they split up when Stallone discovered he was not the father of her daughter. Despite this, she was given his surname at birth.
After Stallone's request that his acting and life experiences be accepted in exchange for his remaining needed college credits to graduate, he was granted a Bachelor of Fine Arts (BFA) degree by the president of the University of Miami, in 1999.
In 2006, Stallone partnered with a beverage company producing an upscale bottled water brand called Sly Water.
In 2007, customs officials in Australia discovered 48 vials of the synthetic human growth hormone Jintropin in his luggage.
His 48-year-old half-sister, Toni Ann Filiti, died of lung cancer on August 26, 2012, six weeks after the death of his son, Sage. She died at their mother Jackie Stallone's Santa Monica home, after choosing to leave UCLA hospital.
Stallone was the recipient of the Heart of Hollywood Award from the Board of Governors of the Cedars-Sinai Medical Center in 2016.