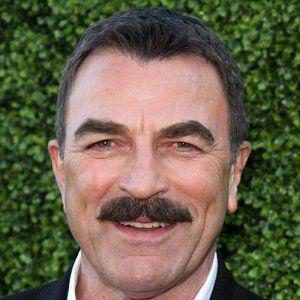 Tom is alive and kicking and is currently 77 years old.
Please ignore rumors and hoaxes.
If you have any unfortunate news that this page should be update with, please let us know using this .

Does Tom Selleck Have the coronavirus?

Thomas William "Tom" Selleck is an American actor and film producer. He is best known for his starring role as the private investigator Thomas Magnum in the television series Magnum, P.I., based in Hawaii. He also plays Police Chief Jesse Stone in a series of made-for-TV movies based on Robert B. Parker novels. Since 2010, he has also been a primary cast member as NYPD Commissioner Frank Reagan in the drama Blue Bloods on CBS.
From 1971 to 1982, Selleck was married to model Jacqueline Ray. During that time, he adopted her son, Kevin Shepard (born 1966). On August 7, 1987, Selleck married Jillie Mack (born 1957). They have one daughter, Hannah.

Tom Selleck was born in Detroit, Michigan, in 1945, to housewife Martha Selleck (née Jagger) (1921-2017) and Robert Dean Selleck (1921-2001), who was an executive and real estate investor. Selleck is of mostly English ancestry, including recent immigrant ancestors. His father was of primarily English ancestry but had distant German ancestry as well, while his mother was of English descent. Through an entirely paternal line Selleck is a direct descendant of English colonist David Selleck who moved to Massachusetts from Somerset, England in 1633. Through this line, Selleck is the 11th generation of his family born in North America.
Selleck has appeared in more than 50 film and television roles since Magnum, P.I., including Three Men and a Baby, Quigley Down Under, Mr. Baseball, and Lassiter. He appeared as Dr. Richard Burke on Friends and as A.J. Cooper on the TV series Las Vegas. He also had a lead role in several westerns based on Louis Lamore books, the Sacketts.