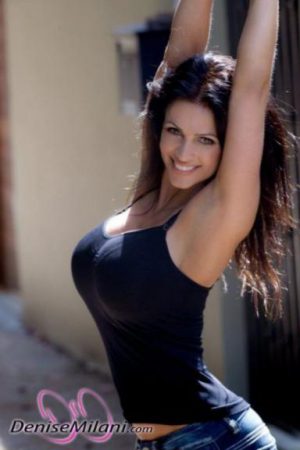 Denise is alive and kicking and is currently 46 years old.
Please ignore rumors and hoaxes.
If you have any unfortunate news that this page should be update with, please let us know using this .

Does Denise Milani Have the coronavirus?

Denise Milani, born Denisa Krajickova Trlica on April 24, 1976 in Frýdek-Místek, Czech Republic, is a Czech glamour model. When Milani was a teenager, her br**sts began to grow at a faster rate than other girls. With big br**sts and great looks, she was encouraged to become a model. In 1996, Milani immigrated to the United States at the age of 21. She took English language classes and later became a physical therapist. By her mid-20's, she was given an opportunity to model for Sports by Brooks as a sports model. As a sports model, she traveled the U.S. and did many interviews. In 2007, Milani left Sports by Brooks and created a website along with a partner which exclusively presented Milani's glamour modeling.
In 2013, she was one of the 10 most desirable women in the world with Gisele Bundchen, Kim Kardashian, Jessica Biel, Megan Fox, Jessica Alba, Carmen Electra, Heidi Klum, Adriana Lima and Angelina Jolie.

Milani's videos and pictorials take place in many different settings such as her house, the beach, clubs, a local mall, and other public events. In one of her most known videos, she interviews Playboy model Jaime Hammer in a limo and a public restaurant, while wearing a pink tank top. In April 2007, Milani created her own MySpace profile. By then Milani was one of the top most known Internet models in the United States. At the same time, Milani first posed for Pin Up Glam. In May 2007, many fans of Milani began a petition, which lobbied for pictorials and videos of Milani topless or naked.
In early 2010, the creators of her website split and the site was shut down. Milani and her husband sued the creators (Periscope Media) of her website for illegal control of her site and other social media accounts at the Los Angeles County Superior Court. Milani won the suit and was able to retain her website and her stage name. For a period of time, her website was in limbo, but launched her new website titled "In Touch with Denise Milani" in April 2011, with new modeling content.
As of late 2011, Denise has become obsessed with fitness and sports health. She begun entering fitness competitions throughout the USA, in addition to occasionally making noticeably more tame and/or less revealing videos and photoshoots.