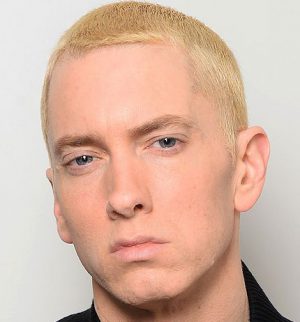 How Old Is Eminem? Eminem Birthday

Marshall is alive and kicking and is currently 49 years old.
Please ignore rumors and hoaxes.
If you have any unfortunate news that this page should be update with, please let us know using this .

Does Eminem Have the coronavirus?

Eminem is an American rapper who was born on October 17, 1972. He is consistently cited as one of the greatest and most influential artists of all time in any genre, with Rolling Stone placing him in its list of the 100 Greatest Artists of All Time and labeling him the "King of Hip Hop".
Eminem is the best-selling artist of the 2000s in the United States. Throughout his career, he has had 10 number-one albums on the Billboard 200 and five number-one singles on the Billboard Hot 100. He is the only artist to have nine albums consecutively debut at number one on the Billboard 200. With over 220 million records sold globally, Eminem is among the world's best-selling artists of all time. Eminem has developed other ventures, including Shady Records, with manager Paul Rosenberg, which helped launch the careers of artists such as 50 Cent.

Eminem has been scrutinized, as a rapper and personally. He was married twice to Kimberly Anne "Kim" Scott. He met Kim in high school while he stood on a table with his shirt off rapping LL Cool J's "I'm Bad". Kim and her twin sister Dawn had run away from home; they moved in with Eminem and his mother when he was 15, and he began an on-and-off relationship with Kim in 1989. Their daughter Hailie was born on December 25, 1995. The two were married in 1999 and divorced in 2001. Although Eminem told Rolling Stone in 2002, "I would rather have a baby through my penis than get married again", he and Kim briefly remarried in January 2006. He filed for divorce in early April, agreeing to joint custody of Hailie. He also has custody of Dawn's daughter Alaina and Whitney, Kim's daughter from another relationship. In early 2010, Eminem denied tabloid reports that he and Kim had renewed their romantic relationship; however, in the same statement his representative also confirmed that they now maintain a friendly relationship. He had legal custody of his younger half-brother Nathan. In his 2014 song "Headlights", Eminem apologized to, and reiterated his love for his mother.
In December 2007, Eminem was hospitalized after a methadone overdose he had first bought from a dealer who had told him it was "just like Vicodin, and easier on [your] liver". He continued to buy more, until he collapsed in his bathroom one night and was rushed to the hospital. Doctors there told him he had ingested the equivalent of four bags of heroin and was "about two hours from dying". After missing Christmas with his children, Eminem checked himself out of the facility weak and not fully detoxed. He tore the meniscus in his knee after falling asleep on his sofa, requiring surgery; after he returned home, he had a seizure. His drug use "ramped right back to where it was before" within a month. Eminem began to attend church meetings to get clean, but after he was asked for autographs he sought help from a rehabilitation counselor. He began an exercise program which emphasized running. Elton John was a mentor during this period, calling Eminem once a week to check on him.