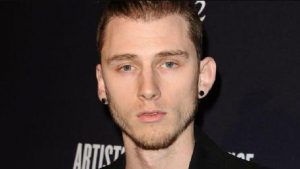 Mgk is alive and kicking and is currently 32 years old.
Please ignore rumors and hoaxes.
If you have any unfortunate news that this page should be update with, please let us know using this .

Does Machine Gun Kelly Have the coronavirus?

Richard Colson Baker is better known by his stage name Machine Gun Kelly. His stage name was given for his rapid-fire lyrical flow and is a reference to notorious criminal George "Machine Gun Kelly" Barnes. MGK is from Cleveland, Ohio and is signed to Bad Boy and Interscope Records. He rose to fame after releasing his first four mixtapes, Stamp Of Approval (2006), Homecoming (2008), 100 Words and Running (2010), and Lace Up (2010).
MGK has openly spoken about his previous 2-year heroin addiction, making a song referencing the addiction titled "Lead You On", and with the song having a profound impact on him, it has allowed for him to self-refer "Lead You On" as his most meaningful song.

MGK is open about his use of cannabis and he has claimed in many interviews that he smokes daily, describing it as a "source of happiness and a way people can feel a little more love." He has frequently mentioned cannabis references within sources of his music and rap persona, making it a forefront of both his rap and personal character.
MGK cites DMX and Eminem as music influences, as well as listening to rock bands Guns N' Roses and Blink-182 during his youth. MGK cites the latter rap and rock artists as major musical influences.