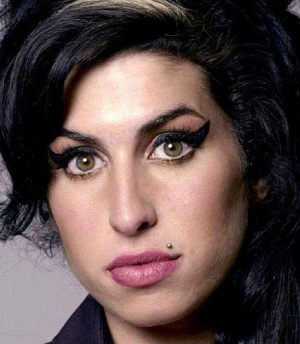 Amy passed away on July 23, 2011 at the age of 27 in Camden, London, England. Amy's cause of death was alcohol poisoning.

Amy Winehouse won five Grammy Awards for her 2006 album Back to Black, and is remembered for songs like "Rehab," "Back to Black" and "Valerie." She died in 2011, at age 27. Born in London, England, on September 14, 1983, Amy Winehouse broke into the music business when, at age 16, a classmate passed on her demo tape to a record label. She signed her first record deal as a jazz vocalist, and her music later blossomed into an eclectic mix of jazz, pop, soul and R&B. Winehouse won five Grammy Awards connected to her 2006 album Back to Black, and earned acclaim for songs like the title track, "Rehab" and "Love Is a Losing Game." Winehouse died tragically on July 23, 2011, at the age of 27 from accidental alcohol poisoning.
Winehouse's bodyguard said that he had arrived at her residence three days before her death and felt she had been somewhat intoxicated. He observed moderate drinking over the next few days. He observed her "laughing, listening to music and watching TV at 2 a.m. the day of her death". According to the bodyguard, at 10 a.m. he observed her lying on her bed and tried unsuccessfully to rouse her. This did not raise much suspicion because she usually slept late after a night out. According to the bodyguard, shortly after 3 pm, he checked on her again and observed her lying in the same position as before, leading to a further check, in which he concluded that she was not breathing and had no pulse. He said he subsequently called emergency services.

At 3:54 p.m. BST on 23 July 2011, two ambulances were called to Winehouse's home in Camden, London. Winehouse was pronounced dead at the scene. Shortly afterwards, the Metropolitan Police confirmed that she had died. After her death was announced, media and camera crews appeared, as crowds gathered near Winehouse's residence to pay their respects. Forensic investigators entered the flat as police cordoned off the street outside; they recovered one small and two large bottles of vodka from her room. After her death, the singer broke her second Guinness World Record: for the most songs by a woman to simultaneously appear on the UK singles chart, with eight.
A coroner's inquest reached a verdict of misadventure. The report released on 26 October 2011 explained that Winehouse's blood alcohol content was 416 mg per 100 ml (0.416%) at the time of her death, more than five times the legal drink-drive limit. According to the coroner, "The unintended consequences of such potentially fatal levels was her sudden death."
Winehouse's record label, Universal Republic, released a statement that read in part: "We are deeply saddened at the sudden loss of such a gifted musician, artist and performer." Many musical artists have since paid tribute to Winehouse including U2, M.I.A., Lady Gaga, Marianne Faithfull, Bruno Mars, Nicki Minaj, Keisha Buchanan, Rihanna, George Michael, Adele, Kelly Clarkson, Courtney Love, and the punk rock band Green Day, who wrote a song in her tribute titled "Amy". In her 2012 album Banga, singer Patti Smith released "This Is the Girl," written as a homage to Winehouse. Mark Ronson dedicated his UK number one album Uptown Special to Winehouse, stating: "I'm always thinking of you and inspired by you." There was a large amount of media attention devoted to the 27 Club once again. Three years earlier, she had expressed a fear of dying at that age.
Family and friends attended Winehouse's funeral on 26 July 2011 at Edgwarebury Lane cemetery in north London. Her mother and father, Janis and Mitch Winehouse, close friend Kelly Osbourne, producer Mark Ronson, and her boyfriend Reg Traviss were among those in attendance at the private service led by Rabbi Frank Hellner. Her father delivered the eulogy, saying "Goodnight, my angel, sleep tight. Mummy and Daddy love you ever so much." Carole King's "So Far Away" closed the service with mourners singing along. She was later cremated at Golders Green Crematorium. The family planned to sit a two-day shiva. Winehouse's parents set up The Amy Winehouse Foundation to prevent harm from drug misuse among young people, and Amy Winehouse's brother Alex is an employee. Winehouse did not leave a will; her estate is inherited by her parents.
On 17 December 2012, British authorities reopened the probe of Winehouse's death. On 8 January 2013, a second inquest confirmed that Winehouse died of accidental alcohol poisoning. In a late June 2013 interview, Alex Winehouse revealed his belief that his sister's eating disorder, and the consequent physical weakness, was the primary cause of her death:
"She suffered from bulimia very badly. That's not, like, a revelation – you knew just by looking at her… She would have died eventually, the way she was going, but what really killed her was the bulimia… I think that it left her weaker and more susceptible. Had she not had an eating disorder, she would have been physically stronger."