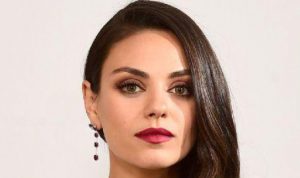 Milena is alive and kicking and is currently 38 years old.
Please ignore rumors and hoaxes.
If you have any unfortunate news that this page should be update with, please let us know using this .

Does Mila Kunis Have the coronavirus?

Milena Markovna "Mila" Kunis is an American actress. In 1991, at the age of seven, she moved from the Ukrainian SSR to Los Angeles with her family. After being enrolled in acting classes as an after-school activity, she was soon discovered by an agent. She appeared in several television series and commercials, before acquiring her first significant role prior to her 15th birthday, playing Jackie Burkhart on the television series That '70s Show. Since 1999, she has voiced Meg Griffin on the animated series Family Guy.
Kunis began dating actor Macaulay Culkin in 2002. During their relationship, there were rumors of the couple getting married, but Kunis denied them. In an interview with BlackBook magazine, Kunis stated that marriage is "not something that's important to me". Kunis said she tried her best to protect her and Culkin's privacy, noting that "We don't talk about it to the press. It's already more high profile than I want it to be." When asked if it was difficult to stay out of the tabloids and press, Kunis responded: "I keep my personal life as personal as I physically, mentally, possibly can." Asked if that is difficult she said, "I don't care. I will go to my grave trying. It is hard, but I'll end up going to a bar that's a hole in the wall. I won't go to the 'it's-happening' place." On January 3, 2011, Kunis' publicist confirmed reports that Kunis and Culkin had ended their relationship, saying "The split was amicable, and they remain close friends."

Kunis began dating her former That '70s Show co-star Ashton Kutcher in April 2012. They became engaged in February 2014, and married during the first weekend of July 2015 in Oak Glen, California. The couple have two children: daughter Wyatt Isabelle Kutcher (born October 2014)[ and son Dimitri Portwood Kutcher (born November 2016).
In January 2011, she revealed her struggle with chronic iritis that had caused temporary blindness in one eye. Some months earlier she had surgery that had corrected the problem. Kunis also has heterochromia iridum, a condition in which the irises are different colors. One eye (left) is brown, and the other (right) is green.