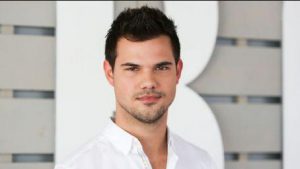 Taylor is alive and kicking and is currently 30 years old.
Please ignore rumors and hoaxes.
If you have any unfortunate news that this page should be update with, please let us know using this .

Does Taylor Lautner Have the coronavirus?

Taylor Daniel Lautner is an American actor, model and martial artist. Lautner is best known for playing Jacob Black in The Twilight Saga film series based on the novels of the same name by Stephenie Meyer.
Lautner dated his Valentine's Day co-star, Taylor Swift for three months in 2009. He then started dating his co-star in Abduction, Lily Collins, in 2010 and broke up the next year. Lautner began dating his Tracers co-star, Marie Avgeropoulos in 2013 until early 2015. He dated actress Billie Lourd in late 2016. They broke up after eight months of dating in August 2017.

In 2010, Lautner was considered to be the highest-paid teen actor in Hollywood. In February 2014, it was confirmed that Lautner would be joining the BBC Three comedy series Cuckoo, replacing Andy Samberg. Lautner has continued in this role, co-starring in the BBC comedy for three series. On June 23, 2016, it was announced that Lautner had been cast in the Ryan Murphy comedy horror series Scream Queens.
The late 2000s saw Lautner become a teen idol and sex symbol, after extensively changing his physique to keep the role of Jacob Black in further Twilight installments, and generating media attention for his looks. In 2010, he was ranked second on Glamour's "The 50 Sexiest Men of 2010" list, and fourth on People's "Most Amazing Bodies" list. Also in the same year, Lautner was named the highest-paid teenage actor in Hollywood.