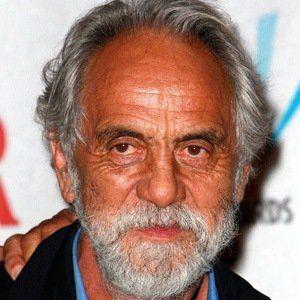 Tommy is alive and kicking and is currently 83 years old.
Please ignore rumors and hoaxes.
If you have any unfortunate news that this page should be update with, please let us know using this .

Does Tommy Chong Have the coronavirus?

Thomas B. Kin Chong (born May 24, 1938) is a Canadian-American comedian, actor, writer, director, musician and cannabis rights activist who is known for his marijuana-themed Cheech & Chong comedy albums and movies with Cheech Marin, as well as playing the character Leo on Fox's That '70s Show. He became a naturalized United States citizen in the late 1980s.
In 1960, Chong married Maxine Sneed in Canada. She is of Black Canadian and Cherokee descent. They have two daughters, Rae Dawn (b. 1961), and Robbi Chong (b. 1965). They divorced in 1970.

In 1975, Chong married Shelby Fiddis in Los Angeles. They had three children, sons Paris (b. 1974) and Gilbran (b. 1981), and daughter Precious Chong. In 1978, the couple adopted Marcus Wyatt. Rae Dawn, Robbi, Marcus, and Precious Chong have each pursued careers in acting. In addition to film work, in May 2011, Precious Chong had her play, Push ...One Mother of a Show, produced in Toronto.
Tommy Chong has become a marijuana activist and supports legalizing the plant's use. He is a regular contributor to Cannabis Culture Magazine and sits on the NORML (National Organization for the Reform of Marijuana Laws) advisory board.
Chong announced on June 9, 2012, that he is battling prostate cancer. He described the cancer "as a slow stage one [that I've] had for a long time." He said that he had been drug-free for about three years, during which time he began having prostate-related problems. On July 15, 2012, Chong tweeted that the hemp oil treatment he'd been using to cure his cancer was effective and that he is "99% cancer free." However, on June 16, 2015, Chong stated that he had been diagnosed with colorectal cancer and was "using cannabis like crazy" in order to endure the treatment.