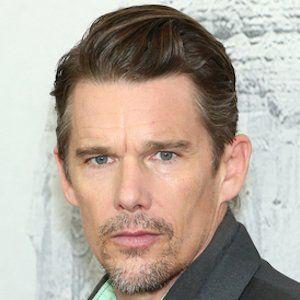 Ethan is alive and kicking and is currently 51 years old.
Please ignore rumors and hoaxes.
If you have any unfortunate news that this page should be update with, please let us know using this .

Does Ethan Hawke Have the coronavirus?

Ethan Green Hawke (born November 6, 1970) is an American actor, writer, and director. He has been nominated for four Academy Awards and a Tony Award. Hawke has directed two feature films, three Off-Broadway plays, and a documentary, and written the novels The Hottest State (1996), Ash Wednesday (2002), and Rules for a Knight (2015). He made his film debut in 1985 with the science fiction feature Explorers, before making a breakthrough appearance in the 1989 drama Dead Poets Society. He then appeared in numerous films before taking a role in the 1994 Generation X drama Reality Bites, for which he received critical praise. In 1995, Hawke first appeared in Richard Linklater's romance trilogy, co-starring opposite Julie Delpy in Before Sunrise, and later in its sequels Before Sunset (2004) and Before Midnight (2013), all of which met with critical acclaim.
Hawke has been twice nominated for both the Academy Award for Best Adapted Screenplay and the Academy Award for Best Supporting Actor; his writing contributions to Before Sunset and Before Midnight were recognized, as were his performances in Training Day (2001) and Boyhood (2014). Hawke was further honored with SAG Award nominations for both films, along with BAFTA Award and Golden Globe Award nominations for the latter. His other films include the science fiction drama Gattaca (1997), the contemporary adaptation of Hamlet (2000), the action thriller Assault on Precinct 13 (2005), the crime drama Before the Devil Knows You're Dead (2007), and the horror film Sinister (2012).