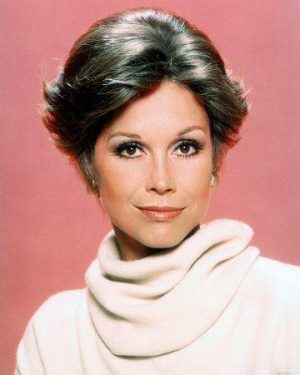 Mary passed away on January 25, 2017 at the age of 80 in Greenwich, Connecticut. Mary's cause of death was bronchial pneumonia.

Mary Tyler Moore was born on December 29, 1936, in Flatbush, Brooklyn, to Marjorie (Hackett) and George Tyler Moore, a clerk. Her maternal grandparents were English immigrants, and her father was of English, Irish, and German descent. Moore's family relocated to California when she was eight. Her childhood was troubled, due in part to her mother's alcoholism. The eldest of three siblings, she attended a Catholic high school and married upon her graduation, in 1955. Her only child, Richard Meeker Jr., was born soon after.
At age 18 in 1955, Moore married Richard Carleton Meeker, whom she described as "the boy next door", and within six weeks she was pregnant with her only child, Richard Jr. (born July 3, 1956). Meeker and Moore divorced in 1961. Moore married Grant Tinker, a CBS executive (later chairman of NBC), in 1962, and in 1970 they formed the television production company MTM Enterprises, which created and produced the company's first television series, The Mary Tyler Moore Show. Moore and Tinker divorced in 1981.

On October 14, 1980, at the age of 24, Moore's son Richard died of an accidental gunshot to the head while handling a small .410 shotgun. The model was later taken off the market because of its "hair trigger".
Moore married Robert Levine  on November 23, 1983, at the Pierre Hotel in New York City. They met when Moore’s mother was treated by him in New York City on a weekend house call, after Moore and her mother returned from a visit to the Vatican where they had a personal audience with Pope John Paul II.
Moore was a recovered alcoholic, and had been diagnosed with Type I diabetes in 1969, after having a miscarriage. In 2011, she had surgery to remove a meningioma, a benign brain tumor. In 2014, friends reported that she had heart and kidney problems and was nearly blind.
Moore died at the age of 80 on January 25, 2017, at Greenwich Hospital in Greenwich, Connecticut from cardiopulmonary arrest complicated by pneumonia after having been placed on a respirator the previous week. She was laid to rest in Oak Lawn Cemetery, in Fairfield, Connecticut, during a private ceremony.