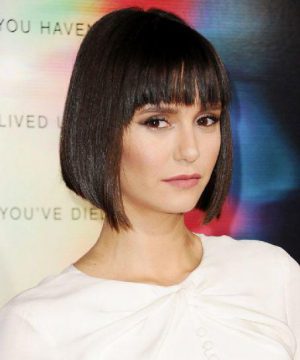 Nikolina is alive and kicking and is currently 33 years old.
Please ignore rumors and hoaxes.
If you have any unfortunate news that this page should be update with, please let us know using this .

Does Nina Dobrev Have the coronavirus?

Nina Dobrev is a Bulgarian-Canadian actress. She portrayed Mia Jones on the drama series Degrassi: The Next Generation, and then played the role of Elena Gilbert and Katherine Pierce on The CW's supernatural drama series The Vampire Diaries (2009-2015, 2017). Dobrev speaks English, French and Bulgarian. While filming The Vampire Diaries, Dobrev lived in Atlanta, but moved to Los Angeles after leaving the series in 2015.
In April 2011, Dobrev was cast as Candace Kelmeckis in the film adaptation of The Perks of Being a Wallflower, alongside Logan Lerman, Emma Watson, and Paul Rudd. In August 2014, she starred alongside Jake Johnson and Damon Wayans Jr. in the 20th Century Fox comedy Let's Be Cops.

Dobrev played the role of Vicki Summers in the 2015 horror comedy film The Final Girls. In September 2015, Dobrev was cast in the film Arrivals, opposite Asa Butterfield and Maisie Williams, portraying the role of flight attendant Izzy; the film was later retitled Departures, and was scheduled to go into production in April 2017. The same year, she was cast in the romantic comedy Crash Pad, alongside Domhnall Gleeson and Christina Applegate, which began filming in Vancouver in fall 2015.
In 2017, Dobrev co-starred as weapons specialist Becky Clearidge in the action film sequel XXX: Return of Xander Cage, opposite Vin Diesel and Samuel L. Jackson; the film was released January 20. Also that year, Dobrev co-starred as Marlo in the film remake Flatliners, opposite Ellen Page.