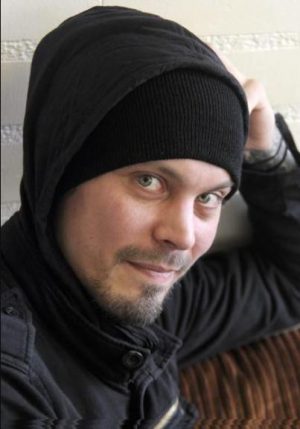 Ville is alive and kicking and is currently 45 years old.
Please ignore rumors and hoaxes.
If you have any unfortunate news that this page should be update with, please let us know using this .

Does Ville Valo Have the coronavirus?

Ville Hermanni Valo is a Finnish singer, songwriter, artist, and multi instrumentalist. He is the frontman of the Finnish rock band HIM. Valo has a baritone voice type and has maintained a wide vocal range throughout his career.
Valo dated Finnish television host and model Jonna Nygrén in the early 2000s. The two became engaged in 2005, but broke-up in spring 2006. The couple reunited in the summer of 2006, but broke-up again in 2007. In 2009, Valo was involved in a relationship with an undisclosed partner, which served as the main inspiration for HIM's 2010 album Screamworks: Love in Theory and Practice. In March 2012, Valo was linked to Parisian model Sandra Mittica. In April 2015, the couple were reported to have ended their relationship. Since September 2016, Valo has been linked to Finnish model Christel Karhu.

Outside of HIM, Valo has collaborated with various other bands and artist during his career, including Agents, The 69 Eyes and Apocalyptica. He's also made brief appearances in TV and film, often collaborating with Bam Margera of Jackass fame. Valo has been regarded as a sex symbol and received several accolades in the music industry. In 2014, he was found to possess the eighth-highest vocal range of any known singer in popular music by VVN Music.
Valo currently resides in Pikku Huopalahti, in Helsinki, Finland. In 2006, he bought a 19th-century tower house designed by Carl Ludvig Engel in Munkkiniemi, where he lived until 2015, when the house was put on sale. Valo is an asthmatic, a vegetarian and non-religious. In 2004, he was invited to the Presidential Independence Day reception at Finland's presidential palace, but was unable to attend due to a fever. He later attended in 2006.