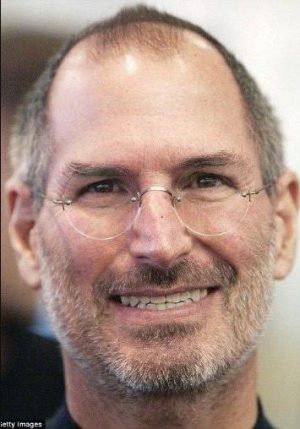 Steve passed away on October 5, 2011 at the age of 56 in California, USA. Steve's cause of death was pancreatic cancer.

Steve Jobs co-founded Apple Computers with Steve Wozniak. Under Jobs' guidance, the company pioneered a series of revolutionary technologies, including the iPhone and iPad.
Joanne Schieble (later Joanne Simpson) and Abdulfattah "John" Jandali, two University of Wisconsin graduate students, gave up their unnamed son, Steve Jobs, for adoption. Jobs’ father, Jandali, was a Syrian political science professor, and his mother, Schieble, worked as a speech therapist. Shortly after Steve was placed for adoption, his biological parents married and had another child, Mona Simpson. It was not until Jobs was 27 that he was able to uncover information on his biological parents.

As an infant, Jobs was adopted by Clara and Paul Jobs and named Steven Paul Jobs. Clara worked as an accountant and Paul was a Coast Guard veteran and machinist. The family lived in Mountain View, California, within the area that would later become known as Silicon Valley. As a boy, Jobs and his father worked on electronics in the family garage. Paul showed his son how to take apart and reconstruct electronics, a hobby that instilled confidence, tenacity and mechanical prowess in young Jobs.
In 2003, reported to deadorkicking.com, Jobs discovered that he had a neuroendocrine tumor, a rare but operable form of pancreatic cancer. Instead of immediately opting for surgery, Jobs chose to alter his pesco-vegetarian diet while weighing Eastern treatment options. For nine months, Jobs postponed surgery, making Apple's board of directors nervous. Executives feared that shareholders would pull their stock if word got out that their CEO was ill. But in the end, Jobs' confidentiality took precedence over shareholder disclosure. In 2004, he had a successful surgery to remove the pancreatic tumor. True to form, in subsequent years Jobs disclosed little about his health.
Early in 2009, reports circulated about Jobs' weight loss, some predicting his health issues had returned, which included a liver transplant. Jobs responded to these concerns by stating he was dealing with a hormone imbalance. Days later, he went on a six-month leave of absence. In an e-mail message to employees, Jobs said his "health-related issues are more complex" than he thought, then named Tim Cook, Apple’s chief operating officer, as “responsible for Apple's day-today operations."
After nearly a year out of the spotlight, Steve Jobs delivered a keynote address at an invite-only Apple event on September 9, 2009. He continued to serve as master of ceremonies, which included the unveiling of the iPad, throughout much of 2010. However in January 2011, Jobs announced he was going on medical leave. In August, he resigned as CEO of Apple, handing the reigns to Cook, and in October he passed away.