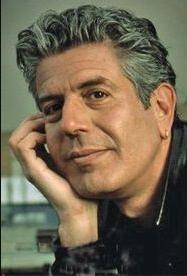 Anthony passed away on June 8, 2018 at the age of 61 in Strasbourg, France. Anthony's cause of death was suicide.

Anthony Bourdain was born on June 25, 1956, eventually establishing himself as executive chef at Brasserie Les Halles. After his article "Don’t Read Before Eating This" appeared in The New Yorker to raves in 1997, Bourdain moved from one high-profile culinary project to the next, including TV shows A Cook’s Tour and Anthony Bourdain: No Reservations. He also wrote several books, including Kitchen Confidential: Adventures in the Culinary Underbelly.
Bourdain married his high school girlfriend, Nancy Putkoski, in 1985, and they remained together for two decades, divorcing in 2005. On April 20, 2007, he married Ottavia Busia, a mixed martial artist. The couple's daughter, Ariane, was born in 2007. Bourdain noted that having to be away from his wife and child for about 250 days a year working on his television shows became a strain. Busia appeared in several episodes of No Reservations—notably the ones in Sardinia (her birthplace), Tuscany (in which she plays a disgruntled Italian diner), Rome, Rio de Janeiro, and Naples. The couple divorced amicably in 2016. In 2017, Bourdain began dating Italian actress Asia Argento, whom he met when she appeared on the Rome episode of Parts Unknown.

Bourdain practiced the martial art Brazilian jiu jitsu, earning a blue belt in in August 2015. He won gold at the IBJJF New York Spring International Open Championship 2016, in the Middleweight Master 5 (age 56 and older) division.
Bourdain had been known for being an unrepentant drinker and smoker. In a nod to Bourdain's (at the time) two-pack-a-day cigarette habit, renowned chef Thomas Keller once served him a 20-course tasting menu which included a mid-meal "coffee and cigarette": a coffee custard infused with tobacco, together with a foie gras mousse. Bourdain stopped cigarette smoking in the summer of 2007 for the sake of his daughter. A former user of cocaine, heroin, and LSD, in Kitchen Confidential he wrote of his experience in a trendy SoHo restaurant in 1981: "We were high all the time, sneaking off to the walk-in refrigerator at every opportunity to 'conceptualize.' Hardly a decision was made without drugs. Cannabis, methaqualone, cocaine, LSD, psilocybin mushrooms soaked in honey and used to sweeten tea, secobarbital, tuinal, amphetamine, codeine and, increasingly, heroin, which we'd send a Spanish-speaking busboy over to Alphabet City to get."