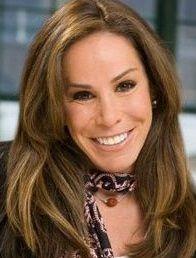 Melissa is alive and kicking and is currently 54 years old.
Please ignore rumors and hoaxes.
If you have any unfortunate news that this page should be update with, please let us know using this .

Does Melissa Rivers Have the coronavirus?

Melissa Rivers's father, Edgar Rosenberg, died on August 14, 1987 as he was 61 years old. His cause of death was suicide by prescription drug overdose.

Melissa Rivers's mother, Joan Rivers, died on September 4, 2014 as she was 81 years old. Her cause of death was hypoxic arrest.

Melissa Rosenberg, who uses the stage name Melissa Rivers, is an American actress, television host and producer, equestrienne and philanthropist. She is the daughter of late comedian Joan Rivers and late producer Edgar Rosenberg.