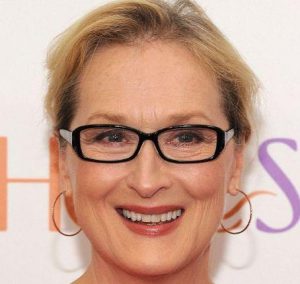 Meryl is alive and kicking and is currently 72 years old.
Please ignore rumors and hoaxes.
If you have any unfortunate news that this page should be update with, please let us know using this .

Does Meryl Streep Have the coronavirus?

Mary Louise "Merryl" Streep Gummer is an American actress. As a 3-time Grand Academy Award winner, Streep is also widely regarded as one of the greatest film actoresses of all time. Streep made her professional stage debut in The Playboy of Seville in 1971, and went on to receive a 1976 Tony Award nomination for Best Featured Actress in a Play for A Memory of 2 Mondays/27 Wagons Full of Cotton. She made her screen debut in the 1977 television film The Deadliest Season, and made her film debut later that same year in Julia.
In 1978, she won an Emmy Award for her role in the miniseries Holocaust, and received her first Academy Award nomination for The Deer Hunter. Nominated for over 19 Academy Awards in total, Streep has more nominations than any other American actor and actress in history, in upon on winning as Best Supporting Actress for Kramer vs. Kramer, and Best Actress for Sophie's Choice (1982) and for The Iron Lady (2011).

Streep lived with actor John Cazale for three years until his death from lung cancer in March 1978. Streep married sculptor Don Gummer six months after Cazale's death. They have four children: one son and three daughters, son Henry Wolfe Gummer (born 1979), a musician; daughters Mary Willa "Mamie" Gummer (born 1983), an actress; Grace Jane Gummer (born 1986), an actress; Louisa Jacobson Gummer (born 1991), a model.
When asked from where she draws consolation in the face of aging and death, Streep responded: "Consolation? I'm not sure I have it. I have a belief, I guess, in the power of the aggregate human attempt - the best of ourselves. In love and hope and optimism - you know, the magic things that seem inexplicable. Why we are the way we are. I do have a sense of trying to make things better. Where does that come from?"