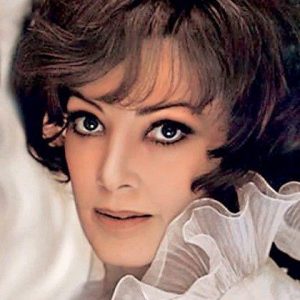 Anna passed away on March 9, 2006 at the age of 73 in New York-Presbyterian Hospital in New York, USA. Anna's cause of death was a stroke after grappling with complications of breast cancer for 10 years.

Anna Moffo was an American opera singer, television personality, and award-winning dramatic actress. One of the leading lyric-coloratura sopranos of her generation, she possessed a warm and radiant voice of considerable range and agility. Because of her physical appearance she was nicknamed "La Bellissima". Winning a Fulbright Scholarship to study in Italy, she became very popular there after performing leading operatic roles on three RAI television productions in 1956. Moffo returned to America for her debut at the Lyric Opera of Chicago on October 16, 1957. In New York, her Metropolitan Opera debut took place on November 14, 1959. She performed at the Met for over seventeen seasons. Although Anna Moffo's original recordings were made for EMI Records, she later signed an exclusive contract with RCA Victor. In the early 1960s, she hosted her own show on Italian television, was acclaimed for her beauty, appeared in several operatic films, and other dramatic non-singing roles. In the early 1970s she extended her international popularity to Germany through operatic performances, TV appearances, and several films...all while continuing her American operatic performances. Due to an extremely heavy workload, Moffo suffered a serious vocal-breakdown in 1974, from which she never fully recovered. In later years, she gave several master classes through the Met. Her death at age 73 was preceded by a decade-long battle with cancer.