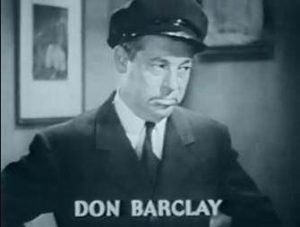 Don Barclay (December 26, 1892 – October 16, 1975) was an American actor, artist and caricaturist whose many roles stretched the period from the Keystone Cops in 1915 to Mary Poppins in 1964 and whose many paintings and caricatures of celebrities filled establishments worldwide and are archived in the Library of Congress.