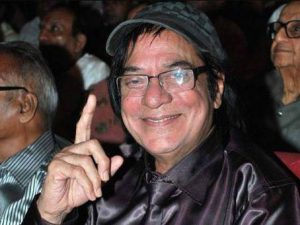 How Old Is Jagdeep? Jagdeep Birthday

Jagdeep is alive and kicking and is currently 83 years old.
Please ignore rumors and hoaxes.
If you have any unfortunate news that this page should be update with, please let us know using this .

Jagdeep was born on March 29, 1939 in Datia, Central Provinces, British India. He is known for his work on Andaz Apna Apna (1994), Raakh (1989) and Sholay (1975). From his first marriage he has 3 children. A son Hussein Jaffrey and 2 daughters Shakira Shafi and Suraiya. Hussein has passed away. From his second marriage he has 2 sons Javed Jaffrey and Naved Jaffrey. Third wife's name is Sugra. He has a daughter named Muskaan from her. Muskaan is six months older then Javed Jaffery' s son Mizaan.
His Son, Hussein, died of a throat infection at the age of 56 in 2009. He had lost his legs in a train accident in 2006. Jagdeep's daughter Shakira Shafi was born in 1961. Naseem Begam, Jagdeep's first wife.