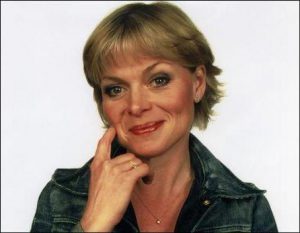 Julie is alive and kicking and is currently 65 years old.
Please ignore rumors and hoaxes.
If you have any unfortunate news that this page should be update with, please let us know using this .

Julie Dawn Cole (born 26 October 1957) is an English television, film and stage actress who has been active for some 40 years. She began as a child performer in what remains her best-remembered film, 1971's Willy Wonka & the Chocolate Factory, playing the spoiled Veruca Salt. She has two children.
Raised in Guildford, Surrey, Cole was twelve when she was cast in the supporting role during the project's pre-production phase in the first half of 1970 which was filmed at the Bavaria Film Studios.

The film debuted in New York on 30 June 1971 and in London the following week, with Cole chosen to present a bouquet of flowers to Princess Margaret at the Royal Premiere. She and Willy Wonka's other pre-adolescent "leading lady," American Denise Nickerson (Violet Beauregarde), both had crushes on Peter Ostrum (Charlie Bucket), also an American, and alternated days spending time with him while there were breaks in filming.
She has a number of theatrical credits as well as pantomime and voice-over work. Cole has appeared on radio in BBC Radio 2 broadcasts of British panto, including the 26 December 1979 broadcast of Puss in Boots as "Princess Rosepetal", as "Jill" in the 25 December 1981 broadcast of Mother Goose, and as "Alice" in the 27 December 1982 broadcast of Dick Whittington.