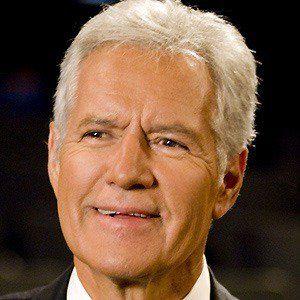 Alex passed away on November 8, 2020 at the age of 80 in Los Angeles, California, USA. Alex's cause of death was pancreatic cancer.

George Alexander "Alex" Trebek (/trɨˈbɛk/; born July 22, 1940) is a Canadian American television personality. He has been the host of the syndicated game show Jeopardy! since 1984, and has also hosted a number of other game shows, including The Wizard of Odds, Double Dare, High Rollers, Battlestars, Classic Concentration and To Tell the Truth. Trebek has made appearances in numerous television series, usually portraying himself. A native of Canada, he became a naturalized United States citizen in 1998.
On December 11, 2007, Trebek suffered a minor heart attack in his home, but returned to work as scheduled in January. He injured an Achilles tendon, requiring six weeks in a cast, while chasing a burglar who had entered his San Francisco hotel room on July 27, 2011. He suffered a mild heart attack on June 23, 2012, but returned to work in July.

On January 4, 2018, the verified Twitter account of Jeopardy! announced that Trebek had suffered a fall, and over the winter break of Jeopardy! taping, underwent surgery for a subdural hematoma. On December 15, 2017, Trebek was admitted to Cedars-Sinai Medical Center after reportedly experiencing complications from his fall in October and underwent surgery to remove blood clots from his brain the following day. Trebek required a short medical leave and returned to regular hosting duty in mid-January 2018.
In 2018, while being interviewed by Harvey Levin on Fox News, Trebek floated the idea of retirement, saying the odds of him leaving Jeopardy in 2020 were 50/50 "and a little less". He added that he might continue if he is "not making too many mistakes" but would make an "intelligent decision" as to when he should give up the emcee role. However, in October that year, he signed a new contract to continue as host through 2022.
On March 6, 2019, Trebek announced that he had been diagnosed with stage IV pancreatic cancer.