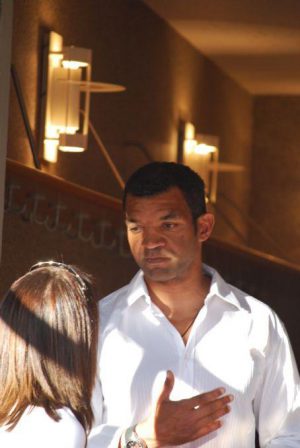 Emile is alive and kicking and is currently 52 years old.
Please ignore rumors and hoaxes.
If you have any unfortunate news that this page should be update with, please let us know using this .

Émile "Milou" Ntamack (born 25 June 1970 in Lyon, Rhône) is a former rugby union footballer who played professionally for Stade Toulousain and France, winning 46 caps. He made his French debut against Wales during the 1994 Five Nations Championship. Ntamack was part of the Grand Slam winning sides in 1997. In 2003, he stopped his professional rugby union career due to a facial injury. His younger brother, Francis Ntamack was also capped by France. Ntamack coached the Espoirs team of the Stade Toulousain and the French U21 team which was the first Northern Hemisphere side to win the World Championships in this age category, held in Auvergne in 2006.